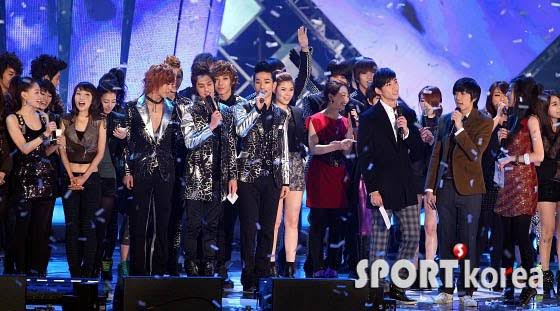 Dubbed as the “golden year of K-Pop,” 2009 saw the rise of groups that would pave the way for the hallyu wave. Timeless songs were produced, unique concepts were born, and K-Pop as a genre was gearing up to become a worldwide phenomenon.

Let’s cap this year off and celebrate almost ten years since the hallyu wave began by taking it back to the hits of 2009!

Released in March 2009, dedicated ELFs may know this as their first complete comeback at the time after their subgroup activities the previous year. This song put Super Junior in the spotlight as this was their most successful release: it topped Music Bank, M! Countdown, and Popular Songs (now known as Inkigayo). “Sorry Sorry” even got a feature in Perez Hilton’s blog!

After a five-month hiatus from K-Pop, this song showcased a new sound for SHINee. Upon its release in October 2009, the song topped Korean music charts, and gave them their debut performance on Music Bank. It even sparked a “Ring Ding Dong craze” across Asia! This was SHINee’s music video to surpass 100 million views on YouTube, and its accompanying EP garnered 60,000 preorders.

This bubblegum pop hit may be a lasting memory for SONEs out there because this song secured Girls’ Generation spot in this list of timeless Korean hits! “Gee” topped the Music Bank charts for a whopping nine weeks and became the best-selling single in South Korea that same year. This song was so successful it set the standard for K-Pop as we know it!

Yet another track that defined the sound of 2009 K-Pop! 2NE1’s fiery hit received a million views upon its release on YouTube as well as a feature on Perez Hilton’s blog. This song was so successful it became a top search term and won three Cyworld awards at the end of the year alongside “Lollipop,” their iconic collaboration with BIGBANG.

2009 also saw the rise of legendary solo acts in K-Pop history. Released in November 2009, this song essentially kicked off Taeyang’s solo career. The track rose to fame on YouTube after various covers were uploaded on the same platform. The song was so well-known that it made Taeyang the first Asian to snag a place on iTunes’ R&B/Soul Albums Chart!

Who could forget about this catchy and timeless bop? This song was originally released in November 2009, after critics noted that it had potential to be T-Ara’s first hit. And it did grow and become a hit: it won five number one awards on Music Bank and Inkigayo, and the Japanese reissue made them the first Korean group to debut on the Oricon and Billboard Japan Hot 100 charts.

This song rose to fame because of its unforgettable choreography. The song was such a hit it helped the group become more well-known within South Korea as they performed on more music shows. They even raked in a massive amount of advertisement requests compared to the two years they’ve been active!

4Minute’s debut song was, and is, still a well-received bop for everyone who hears it. Released in August 2009, this song effectively kicked off the rest of 4Minute’s successful career because it was a huge success across different music charts in South Korea. It even ranked 20th on Melon Chart‘s Yearly 2009!

This song may ring a bell for K-Pop and non K-Pop fans alike as it is one of the best-selling songs in South Korea. G-Dragon dominated the charts and everyone else’s hearts, as well. Its impact is so phenomenal that the accompanying album, also titled “Heartbreaker,” is currently the best-selling album by a Korean act since its release!

Named one of the biggest hits in South Korean music history, this timeless hit helped Brown Eyed Girls stand out among the rest. Released in July 2009, this song topped South Korean music charts immediately. It even won Inkigayo‘s “Mutizen Song” later that year, and the “Best Dance/Electronic Song of the Year” in the Korean Music Awards the following year.