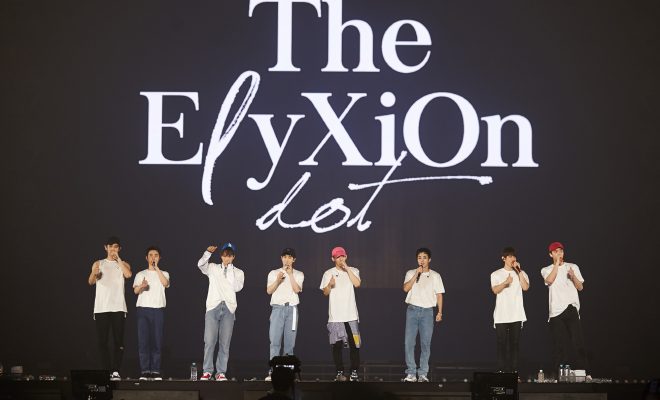 EXO made our hearts go “up and down like a rollercoaster” with the last three shows for their The ElyXiOn in Seoul tour!

We’re still overwhelmed with emotions as EXO’s The ElyXiOn tour officially wrapped up with its final, three-day stop in Seoul! The ElyXiOn [dot], held from July 13 to 15, saw the group fill up Seoul’s Gocheok Sky Dome with thousands of dedicated EXO-Ls.

The three-day sold-out concert series witnessed a lot of moments that EXO-Ls would surely have in their minds and hearts for a long time. We listed down the memorable moments from The ElyXiOn [dot] in Seoul – from new stages to funny moments, so read on! 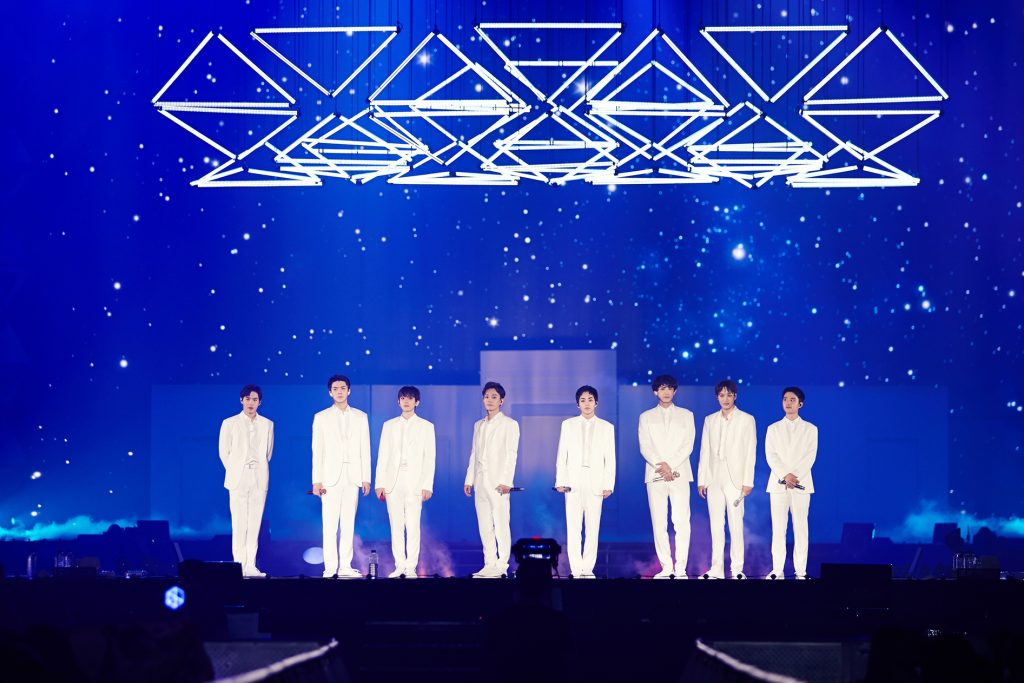 1. ChanHun’s new stage with “We Young”

EXO’S rap line members Chanyeol and Sehun delighted the fans with their new, fun-filled stage featuring a new track called “We Young”. The duo performed an energetic and youthful number – true to the song’s name – on the first day of The ElyXiOn [dot]. EXO-Ls were delighted as they watched Chanyeol and Sehun looking happy and carefree on stage with the new number – and we’re hoping to see it again next time!

2. Kai’s tribute to his late father

Kai brought the entire arena to tears as he addressed his late father and thanked him and his mother for helping him chase after his dream and be the person he is right now. “I started dancing for the first time when I was nine years old and in the second grade of elementary school. My parents held my hand and took me to dance class, and so I was able to dance,” he tells the crowd.

3. The several special guests who came for support

Several SM artists showed up to cheer on for EXO – including the members of NCT and Super Junior’s Siwon! The cast of Rich Man also held their mini-reunion as they came to support the show’s lead actor and EXO’s leadernim Suho!

Kyungsoo’s leading lady for his upcoming sageuk drama 100 Days Husband Nam Ji Hyun and Jeon Mi Seon who played Kai’s mom in Andante also dropped by to watch the shows! Choi Eunjong, the director of Sehun’s upcoming film Dokgo Rewind, also went to see how the film’s lead actor is doing – and he was doing really great, if you ask us!

고생했어! It was a wonderful stage. Looking forward to your next step! EXO PLANET #4, The EℓyXiOn [dot] Well done!

Baekhyun was definitely out for blood on the first day of The ElyXiOn [dot] – especially during his new solo stage with the song “Psycho”! Right from the start, the main vocalist had the crowd’s jaws dropping with his wild performance aura, but Baekhyun’s “Psycho” stage was definitely on another level!

During the first day, EXO noticed how everyone in the crowd seemed to be wearing red. The group pointed it out and asked those who attended what it meant. Suho even quipped that he would surely find out through social media later on, and Chanyeol himself went to the side of the stage to ask the fans personally!

The boys found out that it was a fan project for the entire concert series – with the colors representing some of EXO’s songs! For the first day, it was red for “Ko Ko Bop” and on the second day, Chanyeol notices the color blue – which fans say was for “Power”. Suho, however, tells everyone on the second day that he already knows they would be wearing black and white for “Universe” on the last day after doing his “research”!

chanyeol went to the side of stage just to ask exo-ls why they are wearing red shirts im crying he is so cute #TheElyXiOn_dot #ElyXionDotinSeoulD1 pic.twitter.com/N81EZfxzV8

We’re all excited and anticipating for EXO’s comeback – and even the boys know it. Baekhyun told the crowd during Day 2 that their comeback album will be out soon. When Suho told the crowd that he had seen everyone asking when EXO’s comeback will be, Baekhyun suddenly proclaims “next next week”! However, Suho quickly averted the situation and asked him what he was talking about – we wonder if there’s truth to this…

Suho : I saw fans wondering when will we release our album…
Baekhyun : Next Next week !!
Suho: What next next week ? What?
Baekhyun: Ahhh next next week is August already~ uweeeekaannaxakabdwu

Xiumin knew just how much EXO-Ls wanted him to have his solo stage – so as a gift for The ElyXiOn era, he blessed us with a heart-stopping performance featuring a new track called “Beyond New”! The fans raved so much about his outstanding performance which was more than worth the wait – in fact, “XIUMIN SOLO” trended in Korea right after his solo stage!

There’s nothing more stressful than attempting to buy tickets for concerts with artists who will surely sell out fast – i.e. EXO. While asking fans from different sections how they they’re doing so far, Baekhyun gives special attention to the ones at the furthest sections. Due to the distance, he asks them if they could still see the boys – to which the fans reply “no” to! The vocalist makes the arena laugh as he tells the fans at the top section to buy a better mouse for their computers for their next concert.

Baekhyun asked if the people on the 2nd floor could see, then if people on the “ceiling” could see and they yelled back NO. Everyone laughed so Baek was like “Say you can!” YES “We look like ants right?” YES “Buy a better mouse!”

The 3-day concert series definitely had everyone raving about its setlist which was full of surprises! Thanks to The ElyXiOn [dot], EXO-Ls finally got a live performance of “Going Crazy” – and it was more than heart-stopping!  EXO also performed “365”, “Moonlight”, “Lucky”, and “Run” after such a long time, which sent EXO-Ls into waves of nostalgia as they relived the moments from EXO’s past concert eras!

SO FINALLY WE GOT GOING CRAZY PERFORMANCE
I WASN'T PREPARED
THIS CONCERT WAS REALLY FULL OF SURPRISES #ElyXionDotinSeoulD1#TheElyXiOn_Dot #EXO @WeareoneEXO
pic.twitter.com/3DWItzTLlN

10. The trailers of 100 Days Husband and Dokgo Rewind before the show

As the fans eagerly waited for the lights to dim and EXO to appear, the trailers for Kyungsoo’s upcoming drama 100 Days Husband and Sehun’s upcoming film Dokgo Rewind were played on Gocheok Sky Dome’s screen! EXO-Ls were ecstatic to get the first glimpse at the two idol-actors’ upcoming projects – which of course, is just making us anticipate them even more!

11. EXO addressing their latest achievements – thanks to the fans!

Suho knows – that’s our main takeaway from The ElyXiOn [dot] as he brings up Twitter and social media during Day 1. He lists their recent huge, historical, and iconic achievements like their fifth consecutive Daesang, their performance in the PyeongChang Olympics and their song “Power” being the first K-Pop song to be played in the Dubai Fountain Show.

The group also talks about the same song’s recent feat of being played during the 2018 World Cup and the EXO LED display at Burj Khalifa’s special lights show. Of course, they thank EXO-Ls around the world and acknowledged that without them, all of these wouldn’t be possible!

Junmyeon: What did we do as a whole the past 1 year? Pyeongchang Olympics!
Chanyeol: Dubai!
Junmyeon: The fountain show!
Junmyeon: 5 consecutive Daesang!
Minseok: In the World Cup Quarterfinals, our song will come out!pic.twitter.com/FhjbqoJvoY

Another era comes to an end as The ElyXiOn tour wraps up, but just like what Suho said at the end of Day 3, we should take this as the start of a new beginning! Despite the boys’ several individual activities this year, they had managed to pull of the entire tour successfully and bring huge smiles to the fans’ faces. Because of this, we’d like to send our huge “thank you” to EXO for starting off our 2018 right – all of you had worked hard and we are looking forward to what EXO has in store for us during the latter half of the year! EXO, fighting!

What was your favourite moment from The ElyXiOn [dot] in Seoul? Let us know by leaving a comment below or tweeting us at @hellokpop!