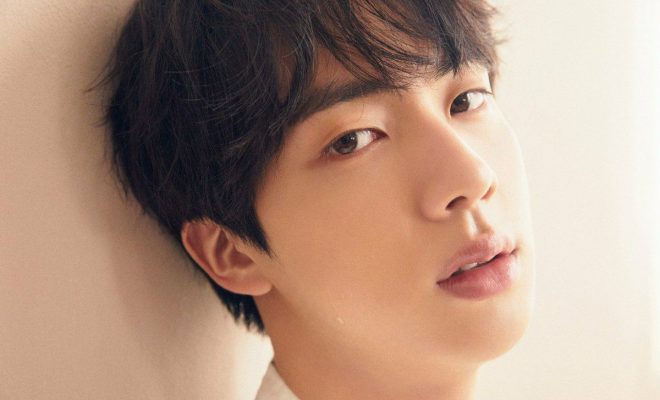 ICYMI, BTS’ Jin just dropped a solo cover for the group’s annual anniversary celebration BTS Festa – and we can’t get over it, seriously!

Can you believe it’s Bangtan Sonyeondan’s fifth anniversary already? We can’t either – but with June 13 coming up soon, the group commences their annual celebration, BTS Festa, once again. All thanks to this string of events, the group had been churning out content after content and activity after activity lately, and we’re more than thankful for each and every one of it.

However, ARMYs didn’t see what was coming for them in this year’s Interlude Ceremony for BTS Festa – and oh my, was it a pleasant surprise! The group’s rising vocal god Kim Seokjin made our feelings a mess at 12 AM KST on June 8 with his cover of Yoon Do Hyun’s “Autumn Outside the Post Office”. This slow rock ballad cover has already reached 892,000 plays on Soundcloud as of writing, and yes, that means we’re listening to it as we write. In fact, why don’t you give it a listen too while reading and bless your ears?

Of course, ARMYs all around the world shared the same feelings we had over this beautiful gift from the heavens!

Here are 15 tweets that perfectly capture how we feel after listening to Kim Seokjin’s wonderful blessing:

1. We’ve been nodding our heads in agreement the moment we saw this tweet!

can i JUST say??? that the song was completely jin’s style. it has his personality written in it (‘: the melody, the singing, the climax,,, the riverside immediately came to mind and i could smell the cold air between autumn and winter and jin’s smile as he bundles into his coat

2. Psh, who’s being dramatic? We’re only stating the truth…

I just need to say:

Jin has the kind of voice which can touch your soul and heart at the same time, if you close your eyes and listen his voice, it can take you to another world, his voice can take you through grasslands and oceans and into a magical world, you'll get lost in his voice #BestOfBTS

5. #FactsOnly part two – all because everyone needs to hear this undeniable truth!

serious talk… jin really has such a beautiful poignant voice that moves you to tears and evoke different kind of emotions the more you listen to it..maybe that’s why i always end up crying after listening to him because it’s so sad but so, SO beautiful? #ThankYouJin #BestOfBTS

you mean to tell me jin was not in his best condition when he recorded it and yet he was able to give us the best song cover of all time? that's vocal god culture

7. NOTHING BUT LOVE AND RESPECT FOR MR. KIM SEOKJIN

may we pls give jin a standing ovation on the amazing, passionate, and absolutely breathtaking cover that he gave us for Festa? he worked so hard on this and deserves to be showered with all the love and support we can give him. #2018BTSFESTA

it's so hard to forget that jin came to the singing industry knowing nothing about it and how hard he's worked to improve and improve and become the singer he is today…..how proud must he feel to see a cover he sang fully by himself trend at #1 :') pic.twitter.com/2hncOZROal

9. Someone hang this work of art in the museum, please?

I got goosebumps. This is ART just listen to his soothing voice, the high notes, such a blessing. I love his voice so much ??(In Front of the Post Office in Fall, Jin cover) pic.twitter.com/UMr3YnM06q

10. Warning: following this tip will make you cry and feel peaceful at the same time – we kid you not.

A lil tip. Listen to JIN'S cover of "가을 우체국 앞에서" in the morning while youre out going to work or riding your bike as the sun rises up. Or drinking coffee by the balcony when the sun sets down, it will be one of the best experience.

11. Who gave you the right to make us feel like this?!

imagine seokjin singing “in front of the post office in autumn” while playing the guitar ??????

12. It’s so difficult to stop getting emotional, okay?!

I drop tears while listening to Jin's cover. He has such a beautiful voice. Kim Seokjin , you made my heart cry today. pic.twitter.com/f0LQTYogRg

ALSO READ: BTS Gets Third Certified Platinum Album in Japan With “Face Yourself”

13. Seriously, how many times have you listened to it already?

me on the repeat button of jin’s new cover pic.twitter.com/i8LKleq3SR

jin truly blessed all of us today with his beautiful voice he’s an angel ????? how can he even exist being this talented and perfect???? i just don’t understand msnsksmsm my last brain cell is gone trying to understand this seokjin finally ended me goodbye

What was your reaction to Jin’s “Autumn Outside the Post Office” cover? Let us know by leaving a comment below or tweeting us at @hellokpop! 😀