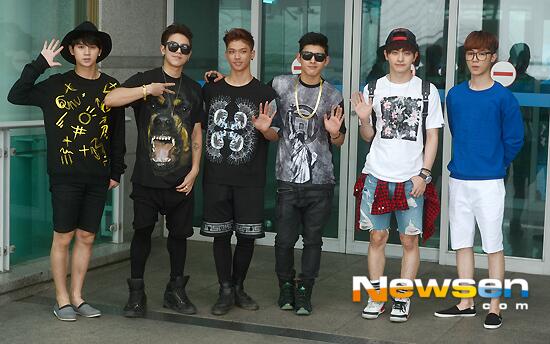 4 Tracks From C-CLOWN That Could Be On Your Playlist

You may or may not have heard about C-CLOWN. If you have, that’s great. If you haven’t, don’t worry.  We’re going to introduce  you to some of C-CLOWN’s songs that were not promoted on major music shows like Music Bank, Inkigayo, Music Core and others.

C-CLOWN is a boy group under Yedang Entertainment, comprised of 6 members–Rome (leader), Ray, Kangjun, Siwoo, T.K and Maru. The members made their debut with the mini-album Not Alone on 19 July 2012.  They have made 3 comebacks since then, with 2 mini-albums and a digital single:  Far Away… Young Love, Shaking Heart and Justice. The first 3 comeback tracks, Solo, Far Away and Shaking Heart could be categorized under the music genre Pop, whereas during their fourth comeback, the boys stepped out of their comfort zone and made an Electro Hip Hop track called Justice. Famous composers, Rado, Ji-In and Wontaek, Shinsadong Tiger and also idol Yong Jun Hyung from B2ST, have helped the group with producing the albums.

C-CLOWN’s mini-albums include some great song, they they were not promoted.  So, they did not reach many listeners. Other than Solo, Far Away, Shaking Heart and Justice, below is a list of recommended songs from C-CLOWN that you might want to add to your playlist:

In The Car has to be the track that is most repeated on my playlist. This song is about a couple having hard time, but they don’t know what to do to fix their relationship.  So, they just remain silent in the car. I am not going through any hardships at the moment, but I really like the rhythm of this song, and I’m really digging T.K’s rap in this song.

I know C-CLOWN’s fans go to bed listening to this song. The mellow melody and the beautifully written lyrics could really just bring us to bed every night, without having any nightmares. ‘I hope you will have sweet dreams, dreamy light is making your dreams shining brightly’ Check out the lyrics while listening to the song! The sweet lyrics will just make you go ‘awwwww’  alongside the members’ soft vocals.

This may the perfect confession song for your girl. The lyrics go: ‘You’re so pretty, you you you. You’re so dazzling, I can’t look at you. You’re so pretty, your eyes, nose, ears. Your bright red lips Make it hard for me’. The rhythm is beautifully composed with a rather slow-paced melody, making my head softly move from left to right. I want to say it again: I am really digging T.K’s and Rome’s rap in this song, probably because of their voices and the flow.

This track is from the group’s 3rd mini-album, Shaking Heart, and features ALi–a female soloist that was once under the same label. ‘Do You Remember?’ however, is only sung by 3 members of C-CLOWN: Rome, T.K and Kangjun. This is a sad and sentimental track about the good memories of a broken-up couple. ALi’s soulful voice matches the song and the members’ voices well, which make the song comfortable to listen to.