7 Songs That Prove We Need a BIGBANG Comeback

I am sure it’s not only VIPs who miss BIGBANG. True, we had all the members try their hands at going solo: G-Dragon strengthening his position as a producer, Taeyang once again proving that R&B is like chocolate for him, Seungri trying to mature, TOP winning awards with his acting skills and Daesung conquering Japan.

But it’s been three years, folks, since BIGBANG released music as a band. Not even a tiny little single or a Christmas song. Or a lullaby.  While we certainly do understand that making good music takes time, and we surely would not want to rush G-Dragon with that production, we cannot help but miss the group’s unique energy, brotherly interactions and awesome music. True, they did have concerts here and there (mainly in Japan), but without any new release. 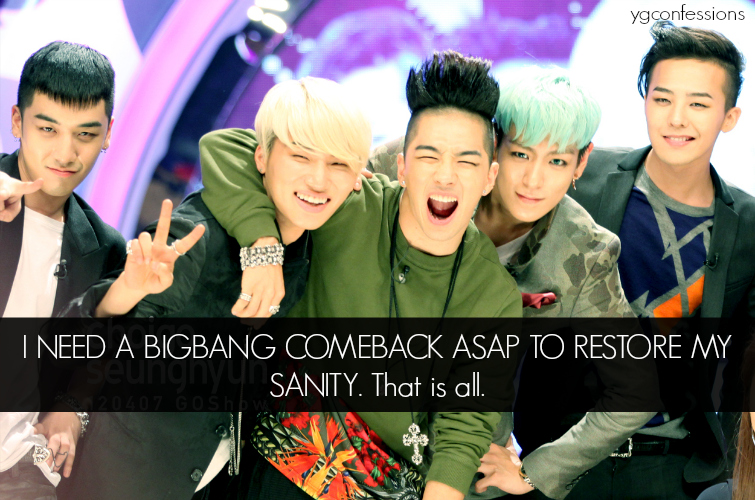 Do you also feel this way?   Source: [email protected]

To cut it short, to ease our BIGBANG hunger until the new album is finally released (sometime this year, who knows when…), we compiled a list of awesome performances. Grab your crown lightsticks VIPs and sing along!

I cannot help but love this acoustic performance of Lie. The boys are easy-going, you can see Seungri beatbox (seriously) and G-Dragon rocks a man-skirt like no one else ever can.

In this Goodbye stage each member got a unique intro for himself, and then they proceeded to perform the iconic Love Song perfectly.

Who says BIGBANG can’t dance? There is this myth that BIGBANG is among the least talented when it comes to formation dancing, but those who have seen the documentary about their debut and have seen them at the beginning of their careers know that this is not at all true. Watch out for TOP (the one notoriously labelled as a bad dancer). These were the times when BIGBANG still did hip-hop and when G-Dragon still did back flips on stage.

Fantastic Baby became a hymn upon its release and I bet there are no K-pop fans around the globe who wouldn’t start singing “Fantastic Baby, dance!” upon hearing the interjection ‘wow’ at any time. The MV has close to 130 million views on YouTube and the band performed it at MAMA Awards every year since 2012 in one form or another. This concert stage below is powerful, entertaining and magnetic.

This 2014 performance of Tell Me Goodbye gives shivers down the spine. Despite it being a Japanese release, this song is a long time favourite of fans globally. You can also hear how much TOP’s English pronunciation improved since the original 2010 release.

Seriously, we need silly BIGBANG back! Parodies like this are unforgettable for fans. I know, I know, the ‘boys’ are almost 30, but still. Easy-going, funny BIGBANG made a lot of fans through the group’s goofiness. We miss you guys!

Are you yearning for a BIGBANG comeback as much as we do?