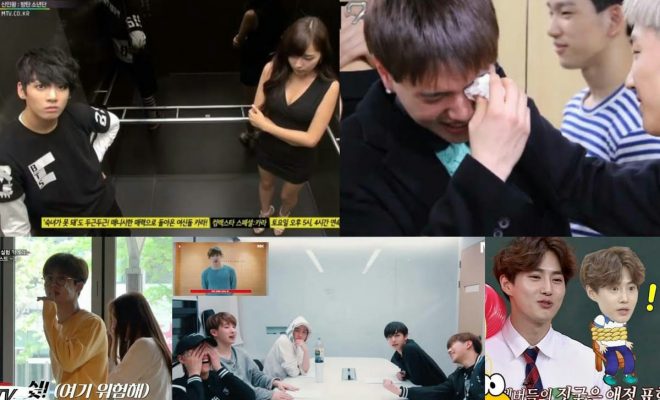 They might act all professional on stage, but a lot of your favourite K-Pop male idols are actually very mischievous.

Not only did some of them participate in the pranks as instructed by production crews, but some had also acted as the brains of several pranking missions that left their fellow members utterly shocked and confused. Through the pranks, fans are able to see the amazing acting skills of several K-Pop idols who would do it all just to pull their groupmates’ legs.

As a celebration of April Fools’ Day, we have collated eight hilariously iconic pranks male K-Pop idols have gone through: 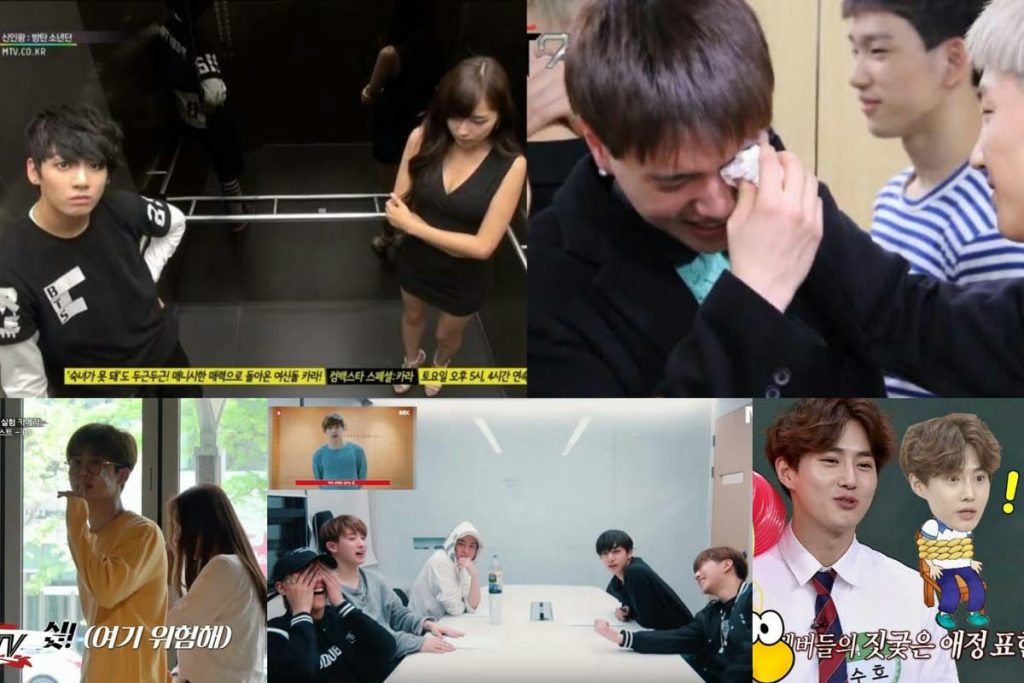 1. BTS’ Elevator Prank And Jungkook Crying On His Birthday

Who could ever forget the elevator prank that the BTS members experienced during their earlier years? ARMYs are still left laughing out loud up to these days whenever the boys’ reactions to sharing an elevator with a crying girl surfaces – especially because none of them knew what to do in such a situation! The hands-down winner of it all was J-Hope though, who had everyone chuckling the very moment the elevator doors opened.

Let us also not forget that time when Jeon Jungkook was still a baby who cried on his birthday after being pranked hard both by his hyungs and the staff – time flies fast, doesn’t it?

iKON‘s Jay had pulled a series of hidden camera pranks on all of his groupmates in one go! Starting off with showing the sympathetic side of vocalists Ju-ne and DK who had to witness staged acts of their staff getting scolded, Jinhwan continued with trying to rope their maknae Chan into taking part of a “scam” – which did nothing but show just how practical the group’s youngest member is.

The series also gifted iKONics with displays of chivalry from the Double B rappers – Bobby and leader B.I. We’re quite sure that everyone swooned the moment B.I tried to hide the female staff member behind him while they face an outraged fan who, with just one look, outsized him.

However, the man (or more appropriately, the victim) of the moment was the kind-hearted Song, who got pranked not just one, but twice! Besides sitting through the same prank as Double B, Song also had to mediate a series of fights which broke out between his groupmates during a meeting. No wonder he ended up lying down on the floor almost in tears when the boys announced that all of it was just a prank!

For male K-Pop idols, pulling pranks on each other might just be one of the greatest expressions of their love toward each other. Given this, GOT7 had shown a lot of times just how much they loved their maknae Yugyeom. As the youngest, Yugyeom had been the center of many pranks from his group – and he falls for them every single time.

This one even had the group members apologizing to Yugyeom’s mother just in case – and it almost didn’t even succeed!

4. MONSTA X as “actors” – plus an unexpected zombie run

Even their own agency Starship Entertainment couldn’t stop themselves from pranking MONSTA X! Remember when they were told to “audition” for Boys Over Flowers 2 and had to act out scripts for “on-the-spot auditions” as an April Fools’ Day prank? Besides getting momentarily blessed with “actor! MONSTA X”, we would never forget their priceless reactions to seeing their VTRs with the other members!

We would also like to remind everyone of that iconic prank where they were surprised with zombies after a seemingly calm screening for a horror movie – look at those scared faces!

At first, SHINee’s Key thought they were filming a hidden camera for Taemin – which the group really was doing, until they realized that the youngest member had already sensed their devious plan. The situation was turned around when – instead of the original victim – Key became the focus of the prank which left him confused until the end!

Getting stuck in an island is definitely not made better by your own groupmates sending you raw chicken in a takeout box – just ask some of the SEVENTEEN members! Even leader S. Coups got a bit worked up over Jeonghan, Wonwoo, Seungkwan, Joshua, and Dino’s little stunt in One Fine Day – and that says a lot!

A runner-up to the top pranks SEVENTEEN had to go through was their series of individual pranks from Dingo. Just look at the utter confusion on their faces and you’ll understand why we laughed so hard!

7. SF9 and HONEYST’s leaders’ pranked during their prank

It was a prank in a prank for FNC Entertainment’s boy groups SF9 and HONEYST, whose leaders’ plans of pulling their members’ legs semi-backfired on them. With an inception-like plan, the two groups managed to get back at Dong Sung and Young Bin’s attempts to make everyone believe they were in a fight.

Look at how Dong Sung and Young Bin’s souls had almost left their bodies after finding everyone laughing following the tense situation they thought they created!

8. EXO’s Suho and his struggles

Being a leader is indeed a tough job – and EXO’s Suho is the top witness to it. Besides having to keep everyone in place, he also has to deal with his groupmates’ mischievous sides all the time. He even confessed on national TV via an episode of Knowing Brothers that SeKaiYeol had taped him to his bed while getting a massage, showing that being a leader indeed knows no rest.

What was your favourite prank done to K-Pop idols? Let us know by leaving a comment below, giving us a holler on Facebook, or tweeting us at @hellokpop!