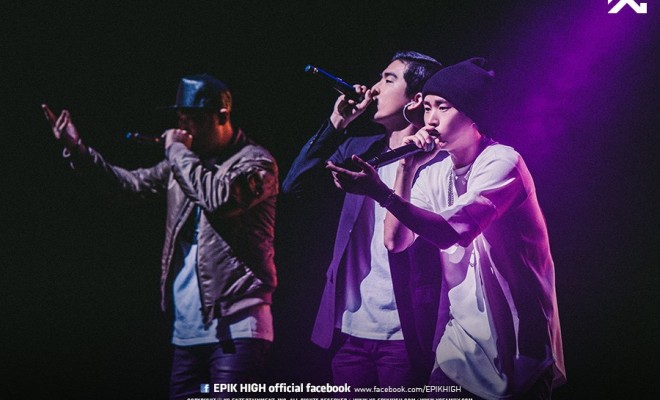 The K-pop world is evolving, the artists as well as and the fans.

We used to listen to ballad tracks a lot, I am not saying we do not listen to them now, it is just the number of fans who listen to hip hop is increasing now. There are idol rappers, as well as more and more rappers coming out of the underground scene to make their ways into the Korean music industry through rapping competitions like Show Me The Money, annually since 2012, and there was a rap competition show even for female rappers, called Unpretty Rapstar. These shows help to build ways and make dreams come true for rappers who have passionate enthusiasm towards hip hop, hence the new generation of upcoming rising star rappers.

We acknowledge this great change, so we decided to ask 11 K-pop fans to share with us their favorite male rappers, reasons why they are their favorites and one track originally from them or one they have performed.

Content disclaimer: Please note that some tracks may contain profanity or content that may be considered objectionable or offensive by some readers.

‘Because he is cool and laid-back and a very talented musician. Fave track is Coup d’etat’.

‘I chose Dynamic Duo because I’ve been listening to them for quite a long time now – I also really enjoy the combination of Gaeko and Choiza’s distinct rapping styles and personalities! Hot Wings is different from their other usual tracks, and it gives a very good chill and laid back vibe, and super catchy too’!

‘Bobby- YGGR. He raps what he wants, and that’s what a rapper should do’.

‘One of my favorite rappers is E Sens. He has an inimitable delivery, a kind of effortless drawl with freeform yet rigorously built flow. As a pure rapper he’s one of the best in the country. He’s no slouch as a lyricist either and has a penchant for poignancy as well as for thunderous punchlines.”Poison” (with Primary) is my favorite track from him.’

‘Beenzino has a rapping style that reminds me of Drake or Childish Gambino – it also helps that he’s cute too. I like Nike SHoes the best because it reminds me of my old school days when I was smitten with my crush’.

‘Tiger JK. Favorite song of his is “8:45 Heaven. It’s a sad song, but it’s beautiful.  And I like him because he’s simply the best. His lyricism is incredible. And he’s a bit of a rebel. Like me. And he was an English major. Again, like me’.

‘Lots of people might consider my choosing of Zico as a clichéd choice, but he was the rapper responsible for introducing and making me appreciate Korea’s hip-hop scene! What I like about him is that not only is he a very expressive rapper, his lyrics are also very introspective yet relatable. NO LIMIT is a great example; like the verses  I did it, I did it myself /Tell him not to get in the way/ My life has no limit A-ye ‘, it’s a harsh reality check that through our blood, sweat and tears can our dreams be achieved, and that our lives have no limit unless we impose one upon ourselves. Whenever I listen to this track, despite it being a narration of Zico’s past tribulations, I feel more pumped up than ever to strive to better myself in whatever I do – so thank you Zico for giving a huge motivational boost’!

‘I like 성인(Adult) from his latest album. I find the way he raps quite carefree and cool’.

“Having grown up during the emerging days of the US Hip-Hop movement, and learning an appreciation for the genre at a young age, trying to hand pick my absolute favorite Korean rapper is like trying to pick out the prettiest flower in a field of wildflowers. With legendary progenitors like Seo Taiji and the Boys and Tiger JK from Druken Tiger, second generation phenoms like Epik High, Dynamic Duo, and Supreme Team, and highly talented millennials like Jay Park, Zico from Block B, G-Dragon from BIGBANG, Dok2, Beenzino, and Rap Monster from BTS, the Korean Hip-hop genre is as varied in styles and talent as they come. I sway more to the Hip-Hop and R&B side of Kpop normally, enjoying the “sub-genres” far more that some mainstream so this question was very difficult for me. Unable to choose just one I settled on Jay Park; whose talent ranges all over the musical spectrum; and Flowsik from Aziatix with his unbelievably deep vocals, down-to-earth personality, and passionate talent. Picking a favorite track from these two is nearly impossible as their officially releases are all pure gold, but for this article I chose Appetizer by Jay Park and Flowsik’s latest solo release, The Calling, as the two tracks I like the most at the moment. ”

‘Tablo. I like Tablo because he has his own unique touch in all his tracks. Every song contains its own life and own color making them so likable and famous. Name one song of Tablo that hasn’t made the music charts go crazy. None, right? It is because he is a rapper that writes lyrics with soul in hands.’

‘I love bobby because even though he’s tough on stage, off stage he’s extremely modest and down to earth. His faith, family, and friends are important to him and he does his best to always remember them and take care of them. He works hard every day reunite with his parents and his brother because he lives far away from home and he never forgets to thank his fans for giving him support. I recommend YGGR because this was his most famous song from SMTM. You can also use “probably perfect” bc it was his first solo piece to be shown to the public’.

Comment below to tell us who your favorite male rapper is and a song from them! We would really like to know about you, too!

Hellokpop, as an independent Korean entertainment news website (without influence from any agency or corporation), we need your support! If you have enjoyed our work, consider to support us with a one-time or recurring donation from as low as US$5 to keep our site going! Donate securely below via Stripe, Paypal, Apple Pay or Google Wallet.
143
SHARES
FacebookTwitter
SubscribeGoogleWhatsappPinterestDiggRedditStumbleuponVkWeiboPocketTumblrMailMeneameOdnoklassniki
Related ItemsBeenzinoDynamic Duoesensfavorite korean rappersG-dragonGiriboyJay Parkkorean male rappers listTabloTiger JKZico
← Previous Story 12 Adorable Moments of Daehan, Minguk, Manse To Brighten Up Your Day
Next Story → 10 Kpop Couples Who Are Confirmed Dating In 2015