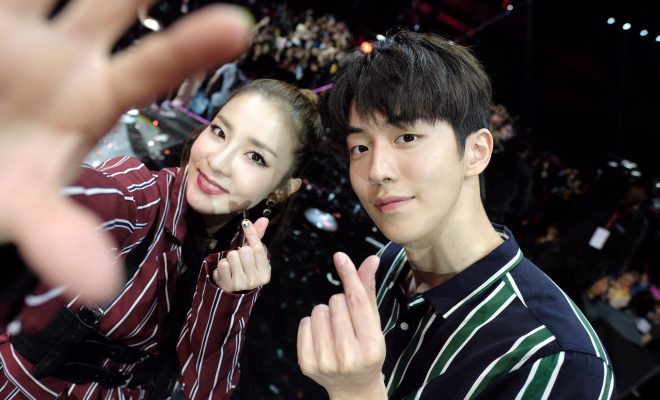 When international casual fashion brand Penshoppe first announced that it will be bringing its brand ambassadors Sandara Park and Nam Joo Hyuk in Manila for their first ever Penshoppe Fan Con together, K-Pop and K-drama fans wasted no time to secure tickets that SM Mall of Asia Arena saw a full house on July 29.

It was a fun-filled event, jam-packed with everything grand and unforgettable. From a mini concert, a bit of a fashion show, to an ultimate fan meeting, Penshoppe Fan Con had it all. And Hellokpop was a fortunate witness to it all.

So, allow us to bring you back to that day as we list down five delightful moments (in no particular order) from Penshoppe Fan Con featuring Sandara Park and Nam Joo Hyuk that got us wishing for another event like this. 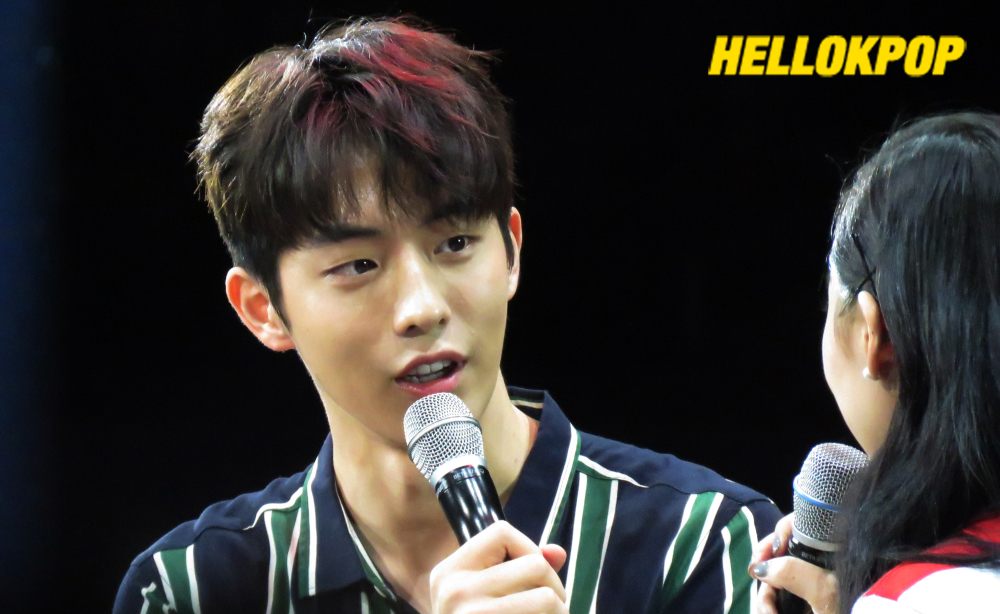 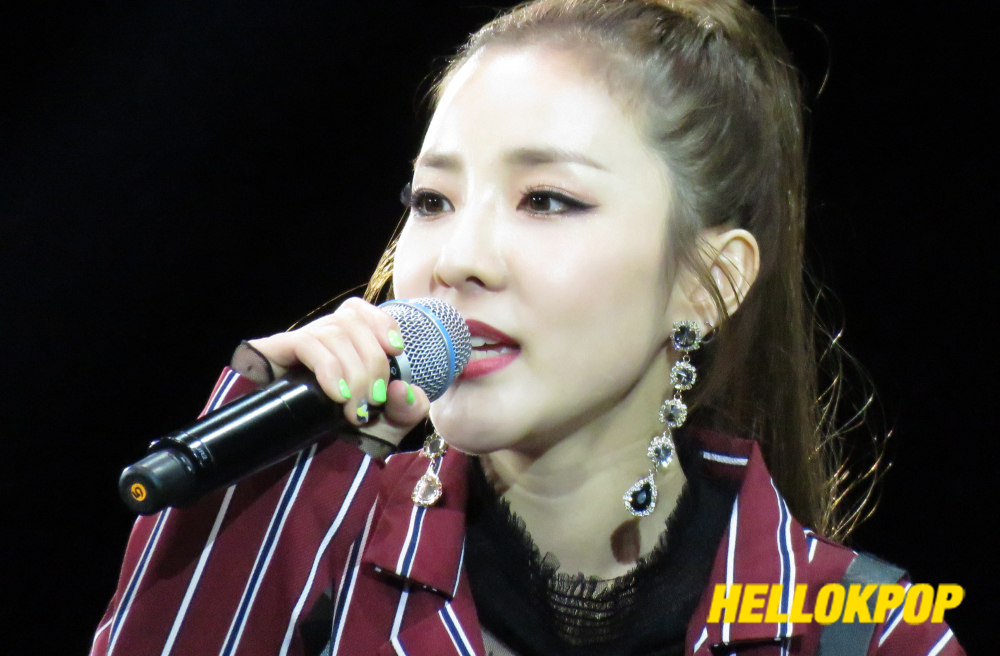 Plays 2NE1’s “Missing You” on loop Okay, it may not be the best song to describe the girl group’s relationship but the title does. And we know you get us. We miss 2NE1, and Dara’s touching declaration of appreciation and love to CL, Bom, and Minzy is not helping in easing our longing for one of the most successful K-Pop girl groups of all time.

Dara named her members as her motivations, recounting their history together that spanned more than a decade. “Nakakamiss sila (I miss them),” she said. Because that 2NE1 moment deserves its own article… 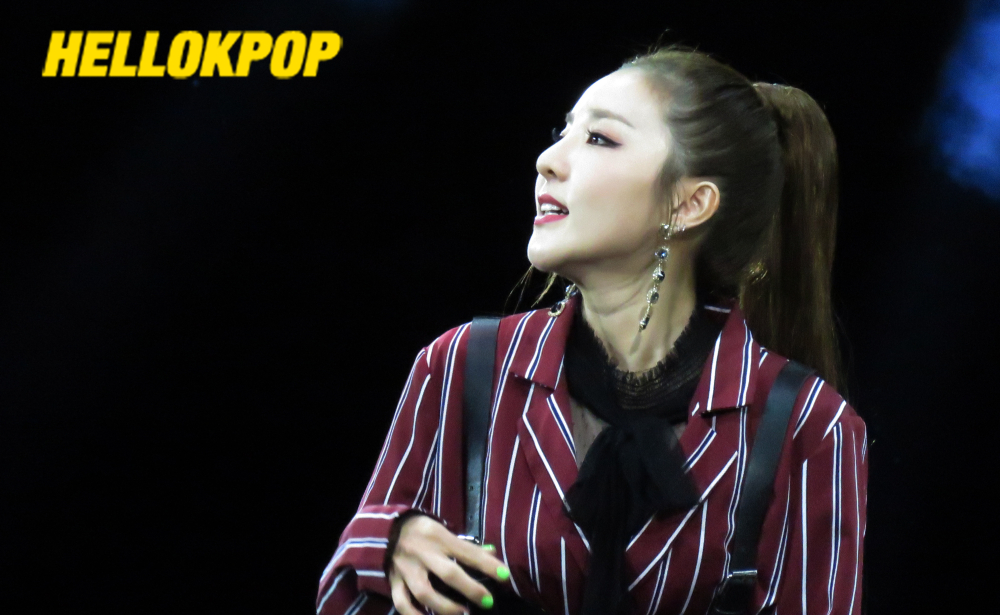 Joo Hyuk got us falling head over heels in love with him thanks to his portrayal of Jung Joon Hyung in Weightlifting Fairy Kim Bok Joo. And the model-actor upped the cheesiness level (not that we complain) during the fan con where all he talked about was his gratitude to fans. swoon (Although some fans — glares at those who inappropriately touched him and Dara during the meet-and-greet — are not too worthy of this affection).

If CL, Bom, and Minzy are Dara’s motivations, Joo Hyuk named everyone who were at the SM Mall of Asia Arena as his. He also said it was his dream to come to Manila and let his fans know how much he loves them. Want more? The model-actor also considered the Penshoppe Fan Con as his most memorable experience in the Philippines (and we hope in a good way) because it was his first time to be surrounded by a huge crowd. 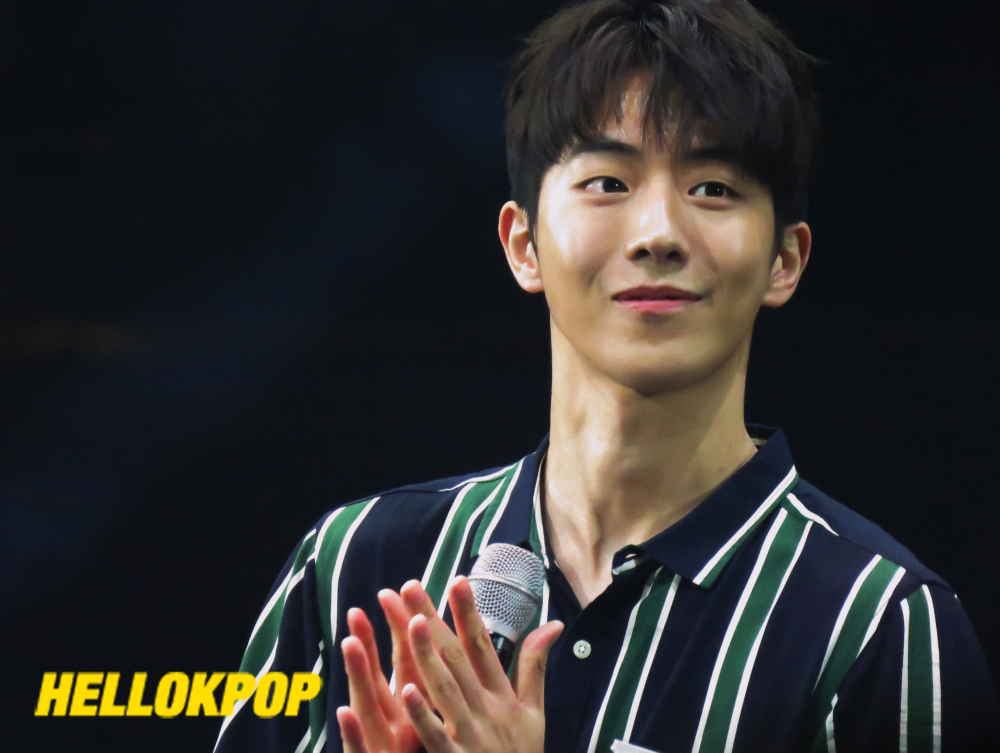 As we are reaching the peak of his sweetness, Joo Hyuk added more sugar to the already too sweet statement when he said his ideal date was to take everyone to the most beautiful beach in the Philippines! But as we were about to reward him the sweetest guy on Earth award, he added that we are going Dutch for that beach trip or in local language — KKB!

Still, he and Dara are the sweetest that night (and most patient). But, start saving up, guys!

The thing about Dara is she never forgets the Philippines. And the Penshoppe Fan Con was another testament to her unwavering love for the country that was her home for a big portion of her life and career.

Dara spoke Filipino as fluently as a local, trying her hardest to communicate with fans in their local language. She also said the sweetest things to her Filipino fans, crediting them for her success. “Kung wala sila, wala ako dito (If not for them, I won’t be here),” she said.

She thanked fans for supporting her since her stint in the reality show Star Circle Quest in 2004 where she finished second next to Hero Angeles. 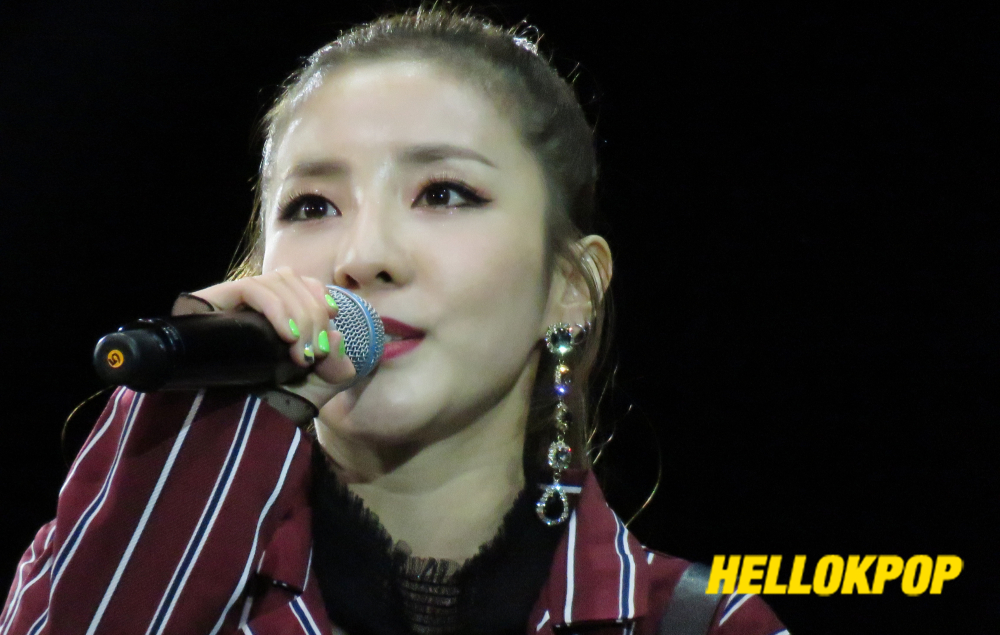 We saw a shy Nam Joo Hyuk at the Penshoppe Fan Con, and we think that’s really adorable. Although he has been in the limelight since 2013 when he began his modeling career, the model-actor, who impressed us with us charismatic poses on camera, cutely smiled and bowed his head when he was asked to walked the “runway” towards the center stage.

Despite his shyness, the model-actor did not shy away in giving his fans finger hearts and waves. He even acted as a wall for the participants of the Denimlab Pose-off Game with Sandara Park where he and Dara gamely posed with the winner for a photo opportunity. 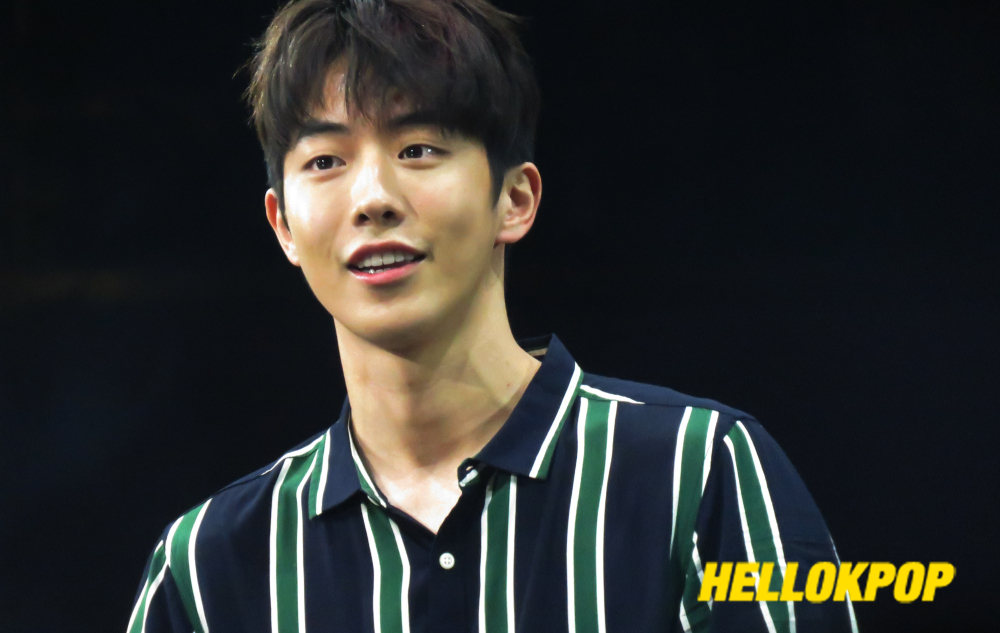 Penshoppe Fan Con did not only showcase its collections and treated fans of Dara and Joo Hyuk to memorable event, but the event also displayed the talents of its local brand ambassadors who delighted the awaiting crowd with good music and dance performances. 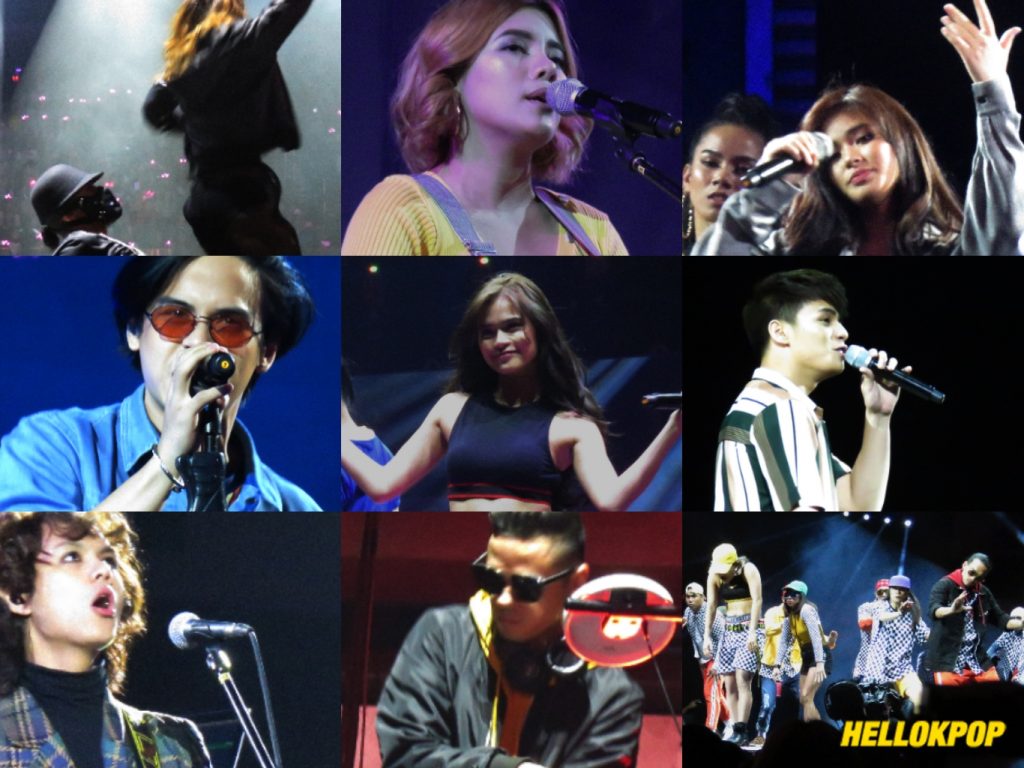 Although there were mishaps and unfortunate incidents we all hope will never happen again, there are sure happy moments to remember the first ever Penshoppe Fan Con of Dara and Joo Hyuk together.

Share with us your most delightful moments during the event!

Penshoppe Fan Con is brought to fans by Penshoppe. We would like to thank Penshoppe for the invitation to the event.

FacebookTwitter
SubscribeGoogleWhatsappPinterestDiggRedditStumbleuponVkWeiboPocketTumblrMailMeneameOdnoklassniki
Related Items
← Previous Story 12 Instagram Moments Of CNBLUE’s Kang Min Hyuk And Lee Jung Shin We Adore
Next Story → #FanEtiquette101: What You Should NOT Do When Meeting Your K-pop Idol