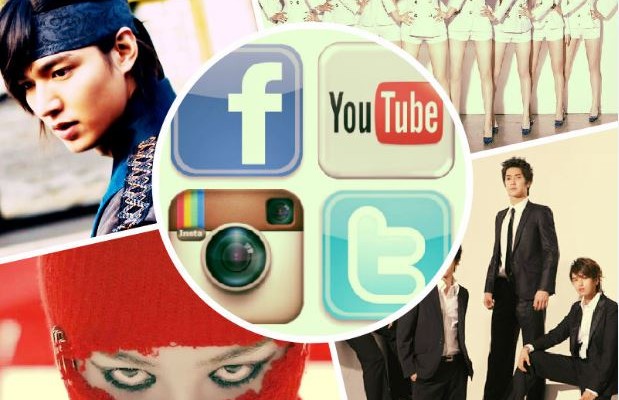 Bigbang‘s leader, G-Dragon, just passed the 3 million followers mark on Twitter, a couple of days after he completed the feat on Instagram. He is not the only one with a large number of followers, but who exactly are the top Korean stars on SNS channels? Let’s take a look at the numbers! First, we are going to examine YouTube, followed by Twitter, Instagram and Facebook.

Our list of the most popular musician YouTube Channels of South Korea starts with a girl band, DSP Media‘s Kara. They managed to gather 122,338,652 views since 2011, their most popular MV, Step, was watched more than 52 million times.

JYP Entertainment‘s popular girl group can boast 124,208,737 view counts so far. Their Good-bye Baby MV from 2011 is the highest viewed, with over 21 million loads.

JYP’s band, currently on hiatus, is the 8th most popular on the list, with 176,066,259 compiled views on their channel. Can you guess their video with the most counts? Of course, it is Nobody, with J.Y. Park‘s epic toilet scene, watched 34 million times.

JYP is still going strong, the hottest guys from the hottest time of the day reached 7th place on the YouTube popularity chart with 180,753,111 views. Check out their hot Hands Up MV, that gathered 29 million views.

Next in line is Beast from Cube Entertainment, with strong 199,555,795 views altogether. The MV with the most views is Fiction.

Cube’s girl band has gathered 314 ,805,802 views to date, making it the number 5 most viewed channel in South Korea.  Their most popular MV is Volume Up, with over 21 million views.

Place number 4 is occupied by YG Entertainment‘s 2NE1, which has a staggering view count of 703,852,364, more than doubling 4Minute’s. Their most popular MV is I am the Best, by far, totalling 92 million views.

Third place is hijacked by a non-K-pop-star with regards to all-time most views of South Korean channels of musicians. Genius young guitarist Jung Sungha boasts 871,327,578 views, and his most viewed upload is a rendition of the Pirates of the Caribbean movie theme, with more than 42 million views. He was 12 years old when this video was uploaded!

Confirming the group’s status as a leader of the hallyu wave, second place goes to YG’s most successful band to date, Bigbang. The guys’ overall view count is nearing the 1 billion mark, currently standing at 904,048,766. Their most popular video is Fantastic Baby, which has been watched over 108 million times so far. *Dance!*

Who else? After his multiple Guinness Book of Records listings, we cannot really expect anyone else to get near his results, at least not now. His channel has nearly 4 billion views (3,824,648,306 to be exact). And of course, the highest view count – also in the history of YouTube – goes to Gangnam Style. Which I am not going to link here, since I assume that everyone’s had enough of it the past two years. Instead, watch his latest ‘affair’ with Snoop Dogg.

RELATED: Who are the K-heroes of SNS? – Part 2: Twitter

Disclaimer: The ranking does not take multiple uploaded versions into account, for example, distributors like LOEN Entertainment also share some of the MVs. Counts are from the official artists channels only.