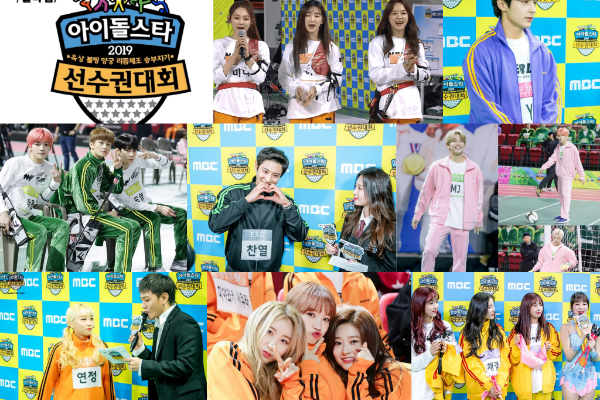 New records and prodigies have been set in the recently concluded 2019 Idol Star Athletics Championships. 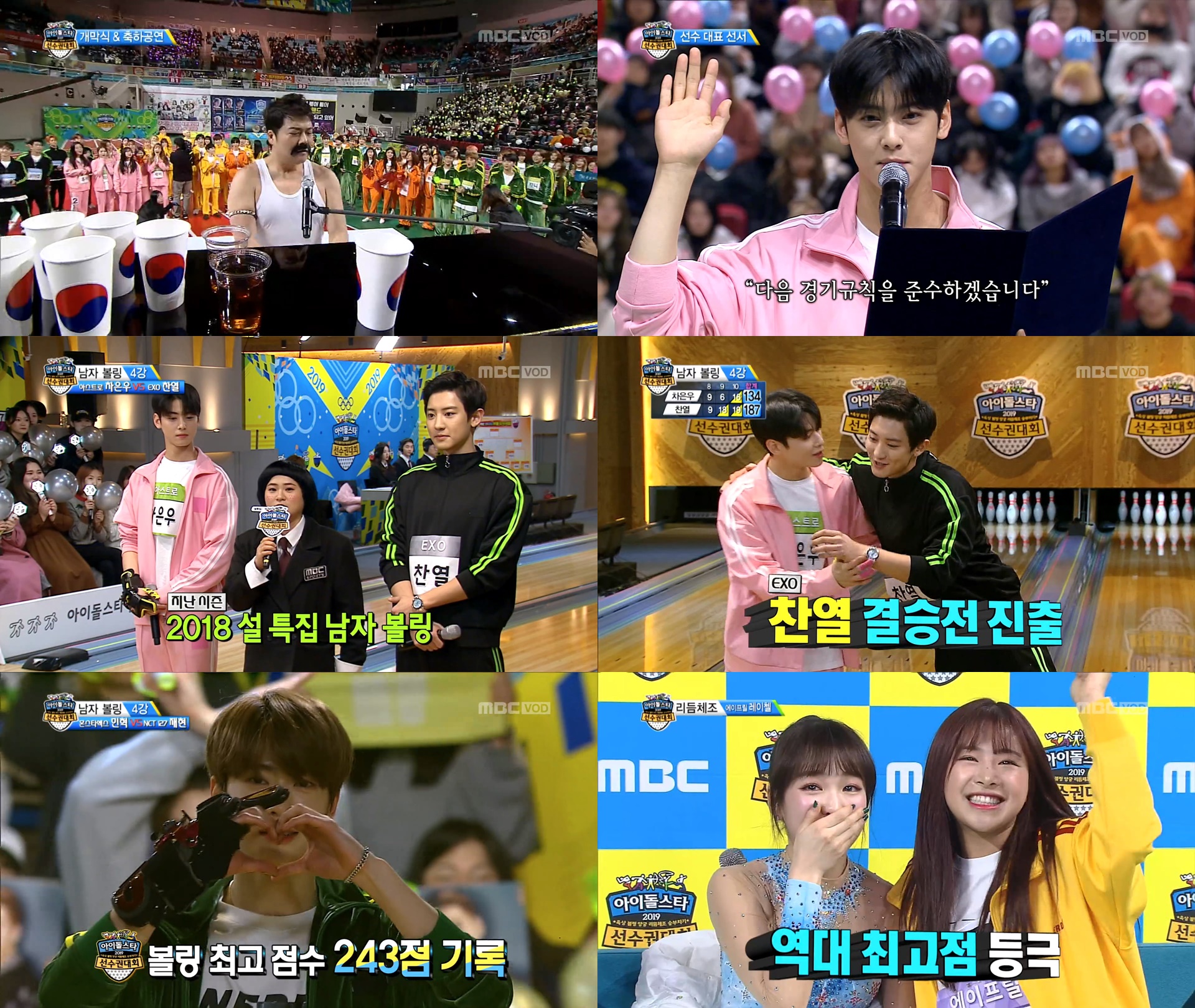 On the February 5th broadcast, preliminary games were held for archery and bowling. Final rounds were also presented for 60m men’s and women’s race and women’s rhythmic gymnastics.

According to Nielsen Korea, the first day of the special event raked in 6.4 viewership rating, peaking at 7.2 percent. 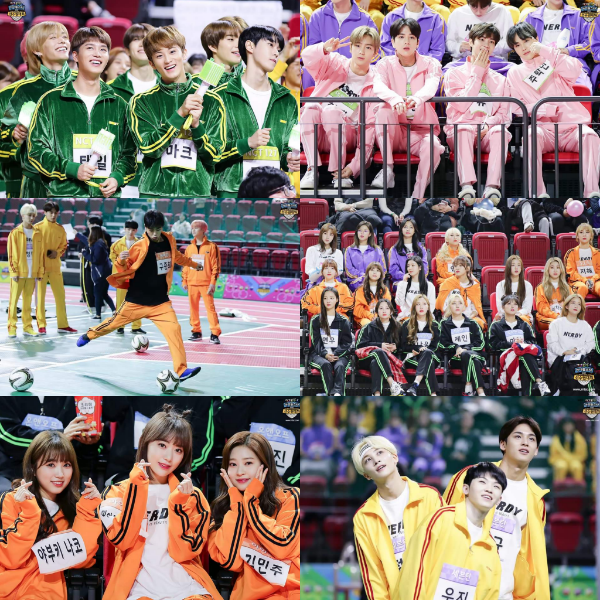 The thrilling second day of 2019 Idol Star Athletics Championships, which was aired on February 6, saw the victors in bowling, archery, men’s 400m relay and shootout.

Soaring high, the nationwide viewership ratings went up to 7.7 percent, peaking at 9.4 percent.

Let’s look back on the scene-stealing moments of the preliminary and semi-final rounds.

In what seems to be a spare battle, NCT 127’s Jaehyun, who has barely learned bowling, notched seven consecutive spares, making him nab the victory with 173 over 144 of SEVENTEEN’s Mingyu.

Next up is MONSTA X’s Minhyuk versus Super Junior’s Shindong. And we love that cute celebratory shirt of “the great Minhyuk”, who eventually defeated his senior.

At the semis, ASTRO’s Eun Woo took the challenging task of facing the champion of last year’s bowling match and his then opponent — EXO’s Chanyeol.

Scoring a turkey (three consecutive strikes), Chanyeol celebrated with fans cheering him from behind his seat. Picking up his momentum, he ultimately proved his bowling prowess and secured a spot in the finale match.

Celeb Five led by comedienne Kim Shin Young impressed the audience with her skills, eventually winning over Momoland in the first elimination round.

Garbed in cute red dress, TWICE dominated over competition rival Red Velvet. Shooting at an average of 9, gugudan also beat GFriend to advance in the finals.

Giving off a great show, SEVENTEEN and MONSTA X battled in opposing camps. With known ace player Vernon on SEVENTEEN’s camp, the boys escaped formidable MONSTA X with two-point difference from their scores of 92-90.

It was also in this match that the crowd went wild with first-timer Kihyun’s perfect gold. The MONSTA X stunner broke the camera lens with his perfect shot. 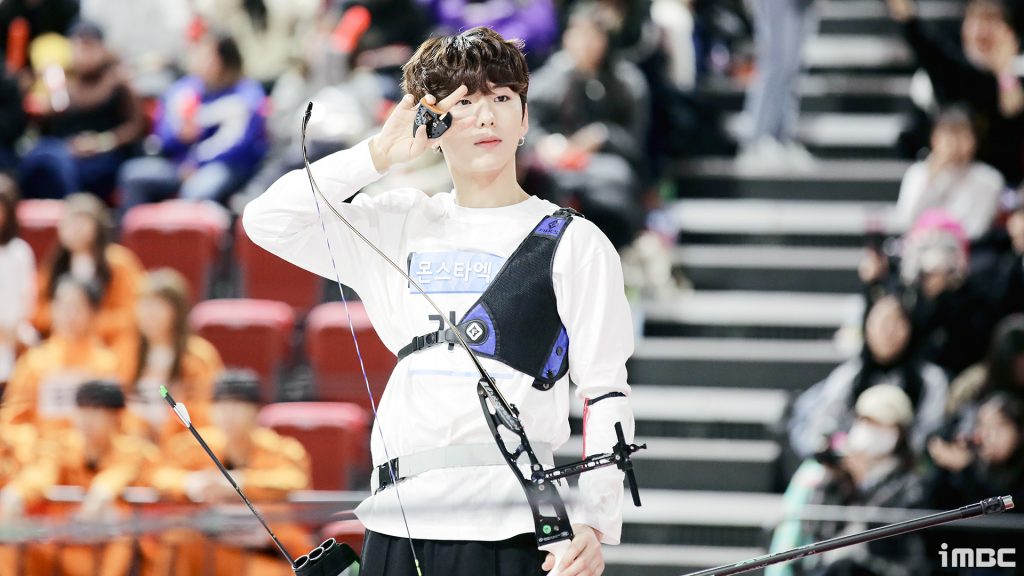 Next up, NCT 127 played with iKON. Donning cupid’s costume, B.I. made the onsite watchers smile with his cute antics.

Eventually, Team NCT 127 advanced to the final round where SEVENTEEN is already waiting.

Introduced for the first time at the 2019 Idol Star Athletics Championship, shootout generated waves of cheers from onsite fans.

Facing off for an intense battle, iKON and SEVENTEEN exchanged kicks and defended their courts well. However, iKON, with its quirky characters, managed to turn the tables as Junhoe hit the goal of their team’s final kick.

Energetic ASTRO distracted Golden Child with their pumped up attitude, ultimately besting the newbies out of the competition.

Marveling the crowd with their pretty boys stance, The Boyz proved they could also kick well as they slammed down opponents from Stray Kids. 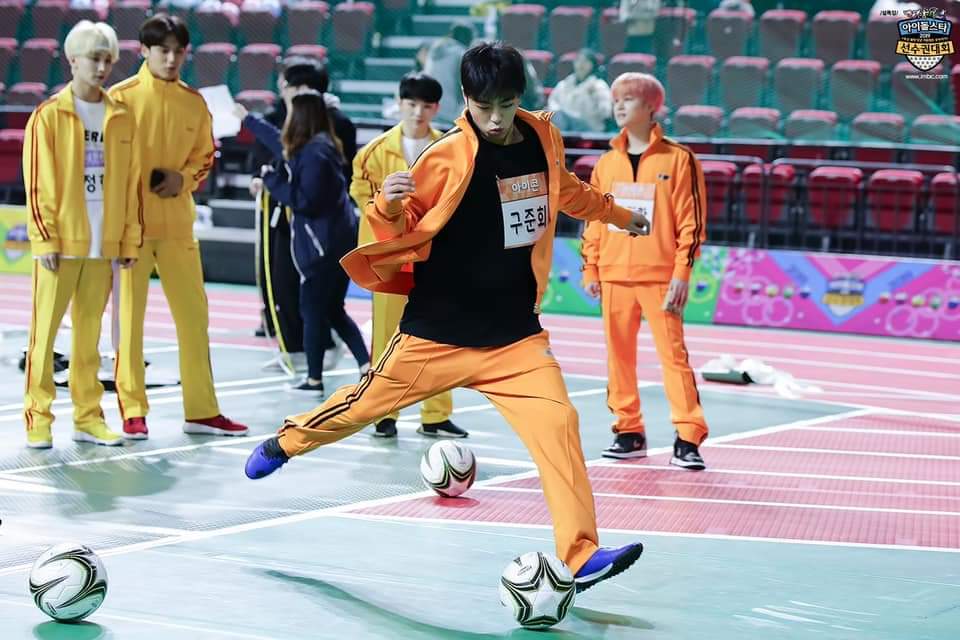 Thrills abound the semi-finals of shootout with the The Boyz and iKON outmaneuvering each other.

iKON won extra points as first-timers exuding comic and surprising skills. They beat The Boyz’ almost perfect goal-keeping for a slot in the finals. 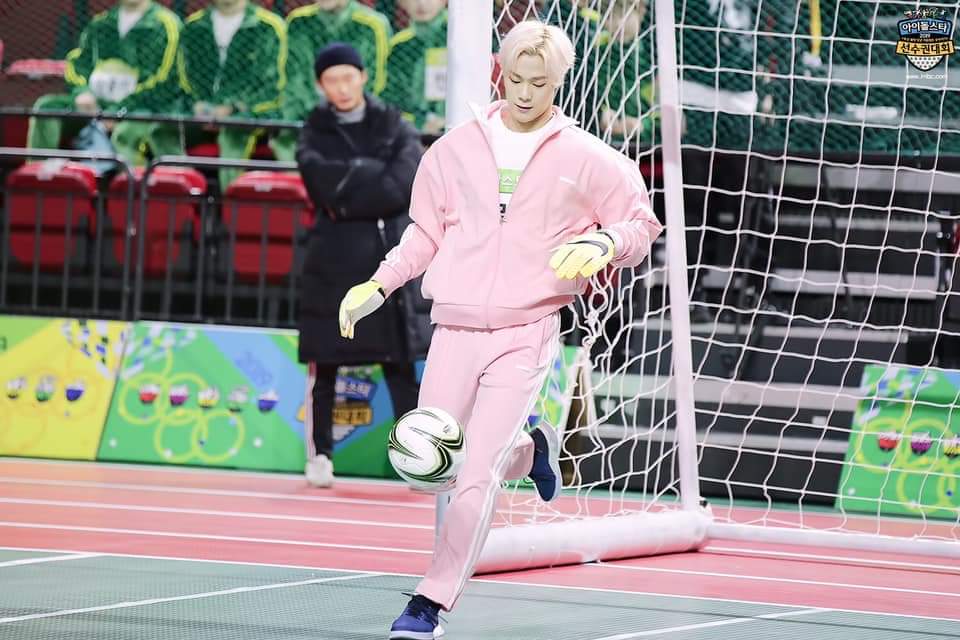 Now, here are the victorious moments of the winners. 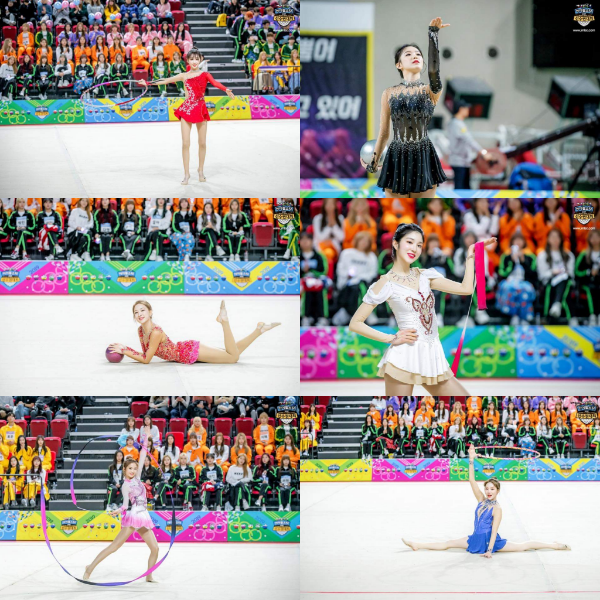 April’s Rachel nailed a difficult routine with clubs as her chosen apparatus, edging out equally amazing performances of ELRIS’ Yukyung and (G)-IDLE’s Shu Ah.
Tallied scores for the top 3 finishers are 13.20, 12.90, and 12.70, respectively.

Sejeong of gugudan maybe a newbie in bowling, but her skill coupled with Mina’s had them inched out Celeb Five comediennes.

Stacking up consistent points of 155, gugudan were hailed as 2019 ISAC bowling queens. Mina obliged with celebratory roll on the floor, while Sejeong awed the audience with a strike while carrying one of their opponents on her back.

Gold medal battle for women’s archery was met with heart-stopping shots from gugudan and TWICE.

In exchange of arrow shots, TWICE’s Tzuyu’s perfect game unfortunately was not enough to defeat gugudan’s Hana, Mina and Sejeong who played an unwavering game. The gold medal marked their second in ISAC.

Proving their undeniable skills deserved the crowning moment of the archery game, NCT 127 and SEVENTEEN’s aces, Mark and Vernon, kicked off an enthralling first game set.

SEVENTEEN’s DK made the second perfect gold of the 2019 ISAC with his second arrow. He then sealed the group’s victory with four consecutive perfect 10 shots. 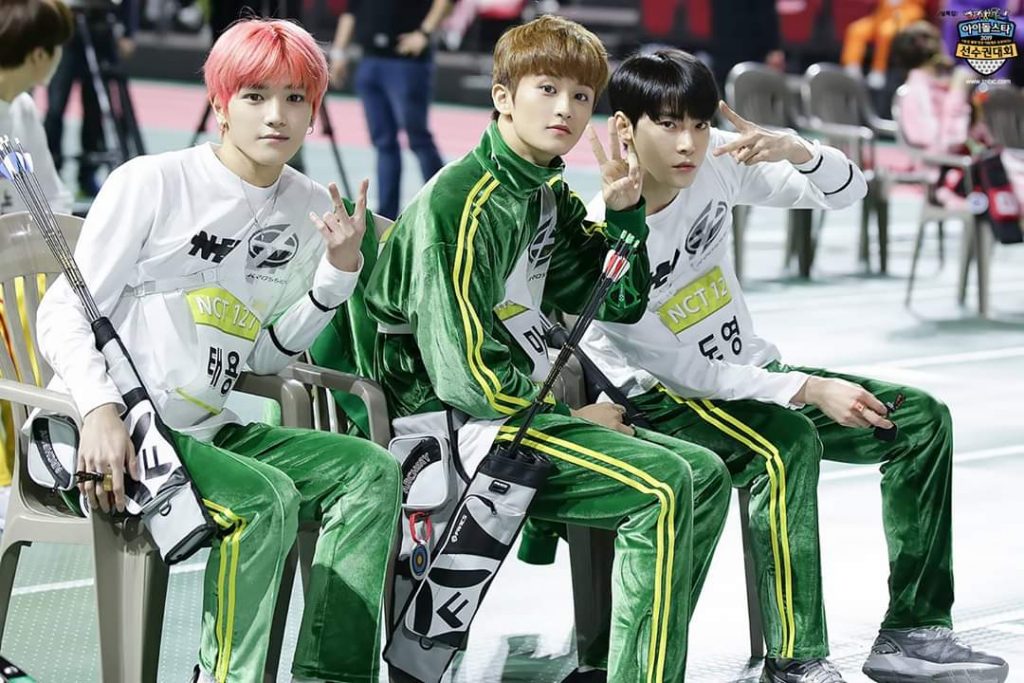 Dedicating their game to Arohas, ASTRO faced dark horse iKON for the final showdown of the new game at 2019 Idol Star Athletics Championships.

Playing good in both offense and defense, a decision round was needed to determine the winner. Moonbin’s last round heroics eventually made ASTRO the first winners of shootout. 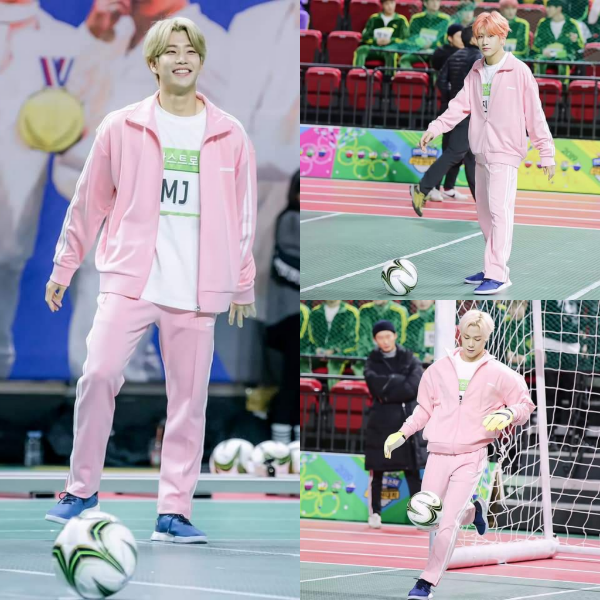 Starting off slow, Chanyeol picked up his momentum on the 5th frame with a strike. From there, a heated exchange of perfect throws between the two idols ensued. Jaehyun who was doing great in picking up spares, eventually yielded to Chanyeol’s commanding skills.

Up to the final frame, Jaehyun fought bravely with his final throw of strike. But Chanyeol capped off a thrilling finish by answering it with his own version of strike. As promised, he gave fans a cartwheel and a cute heart-bite when he won.

In the finals match of Men’s 400m relay, ASTRO, Stray Kids, and Golden Child were neck-to-neck.

Failing to defend their title, Golden Child came in second to ASTRO who got their second gold medal after winning in shootout.