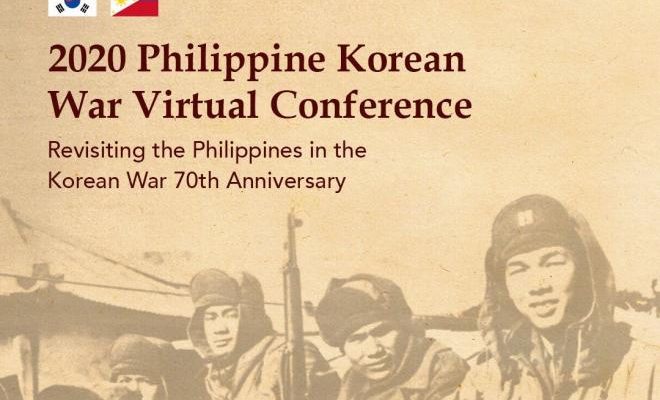 The 2020 Philippine Korean War Virtual Conference titled “Revisiting the Philippines in the Korean War 70th Anniversary,” honored the battles that the South Koreans fought for their freedom and democracy while emphasizing the valor of the Filipino soldiers who marched beside them.

On 10 December, the Embassy of the Republic of Korea, together with the Ministry of National Defense and Ministry of Patriots and Veterans of South Korea, as well as the Korean Cultural Center in the Philippines, held a virtual conference commemorating the 70th anniversary of the Korean War. 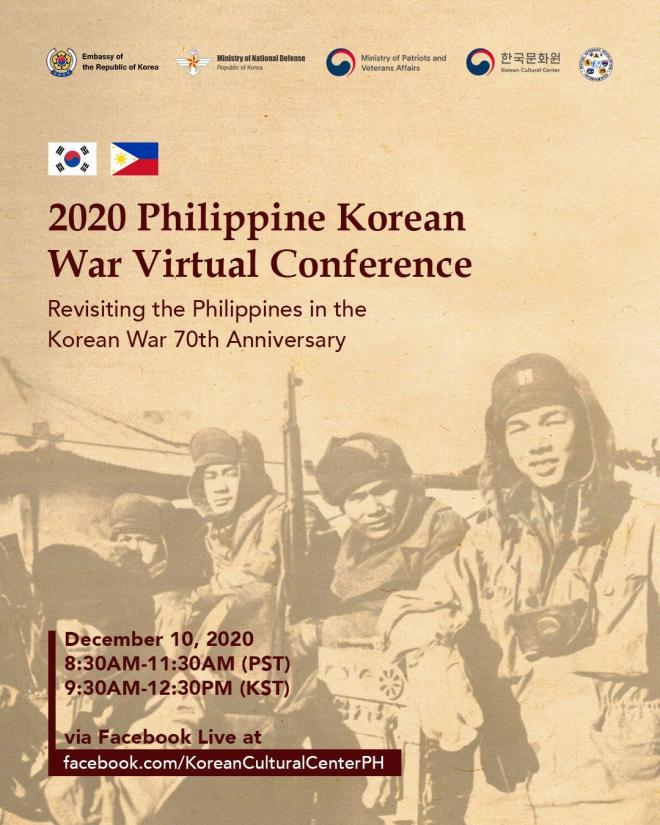 “The moment you removed your socks, your skin would fall off,” Maj. Maximo P. Young recalls during the conference. At 98, he relates the harsh and cold tale of spending winter – a season alien to Filipinos – in a foreign land fighting another nation’s war. Maj. Young was a veteran of three wars, including the Korean War.

He was a member of the 10th Battalion Combat Team (BCT) of the Philippine Expeditionary Forces to Korea (PEFTOK), which went to the Korean Peninsula in the 1950s – the first in Asia to do so – to answer the call of the United Nations to aid the Republic of Korea in its fight for democracy against communist invaders. Five BCTs stayed until the war ended in 1955.

“The Korean war has become a forgotten war for today’s 100 million [or so] Filipinos, but for the veterans then it was [the] defining event of their lives,” declared Undersecretary Ernesto G. Carolina, Administrator of the Philippine Veterans Affairs Office, during the event.

Not many Filipinos realize the role these veterans played in South Korea’s struggle to preserve its freedom and sovereignty. Fortunately, PEFTOK’s distinguished victories, such as those in the battles of Yultong and Eerie Hill, continue to be remembered to this day.

The conference was attended by members of the Armed Forces of the Philippines and civilians via Zoom and Facebook Live. Minister PARK Sam-Duck from South Korea’s Ministry of Patriots and Veterans opened the event and was followed by His Excellency HAN Dong-Man, Ambassador of the Republic of Korea to the Philippines, who delivered a special message about cooperation between South Korea and the Philippines.

Ambassador Han highlighted his gratitude to the Filipino people, and stated, “Korea would not be enjoying peace, democracy, and economic prosperity without the Korean War veterans.” He considered COVID-19 no different from a war against an invisible enemy, but it is “something that we can overcome together with cooperation, helping one friend to another.”

The conference also had insightful lectures from three esteemed history professors: Dr. Ricardo Trota Jose from UP Diliman, and Ateneo de Manila University’s Dr. David O. Lozada III and Mr. Neville Jay Manaois. They discussed the significance of incorporating the Korean War in school curriculums and how best to approach it.

According to Mr. Manaois, now is an opportune time to teach about the Korean War given the heightened interest of Filipinos in Korean history and way of life due to the prevalence of the Korean Wave or Hallyu.

The discussions about the Korean War and the Filipinos’ participation in it shed light on a war often overlooked in the teaching of Philippine history. Significantly, this war strengthened the friendship between Korea and the Philippines over the past seven decades.

At present, the Philippines is working toward understanding the value of the Korean War and its implications on national and diplomatic relations then and now, as well as exploring its nation-building role.

Though it is difficult to access sources and materials about the Korean War from a Filipino perspective, we should understand that history is useful in navigating the past and the present to build a better future.