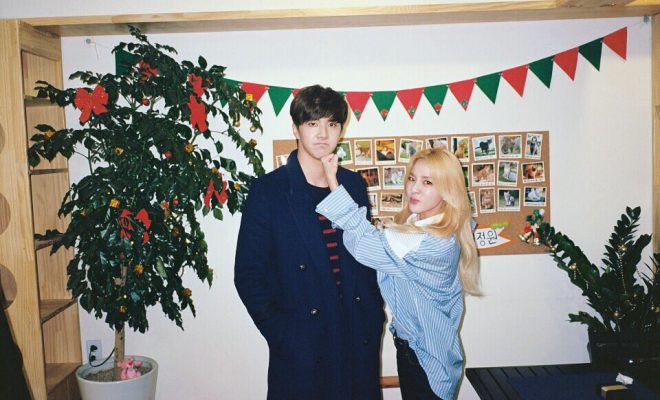 2NE1’s Sandara Park: “I Still Have A Long Way To Go As A Sister”

In the sixth episode, Thunder met with the show’s hosts, Yoon Jongshin and Kim Heechul at a cat café where the prank for his cat-loving sister will take place. According to the Sign singer, he wanted to pull a prank on Dara as a means to wish for a good year for them.

In the show, Thunder pretended to be venturing into a business with a man who was selling natural supplements for cats. He ended up signing a contract to use his name for the business.

Despite her hesitation and wariness of her brother’s transaction, Dara remained quiet as the two men were discussing. Then, people acting as the victims of the man came in and caused chaos in the café .

In the midst of the conflict, Dara stood in front of her brother and defended him. Heechul and Jongshin then entered the café disguised as police officers. Unable to contain her emotions any longer, Dara burst into tears.

“I just wanted to protect my brother and I know he did nothing wrong,” she explained on defending Thunder.

According to Thunder, Dara always tries to trust and support him in his plans despite her disagreements. Hearing this, Dara once again burst into tears.

“I still have a long way to go [as a sister]. I have to guide him to good things but I could not,” she said. She added that her brother is a nice guy. However, people misunderstood him as being dependent on his sister.

She also explained that her brother never asked her for gifts. “Sometimes, I buy him clothes and people often leave bad comments about him,” said Dara.

“I’m so worried that people may think bad of my brother because of me,” she added.

“As a kid, she used to to take care of me when my mom was busy,” recalled Thunder. The former 2NE1 member is six years older than her brother. Thunder is also the youngest among three siblings.

Watch the heartwarming scene between the celebrity siblings below.

Hellokpop, as an independent Korean entertainment news website (without influence from any agency or corporation), we need your support! If you have enjoyed our work, consider to support us with a one-time or recurring donation from as low as US$5 to keep our site going! Donate securely below via Stripe, Paypal, Apple Pay or Google Wallet.
117
SHARES
FacebookTwitter
SubscribeGoogleWhatsappPinterestDiggRedditStumbleuponVkWeiboPocketTumblrMailMeneameOdnoklassniki
Related Items2NE1DaraHeechulMBCMBLAQSandara ParkSecretly GreatlyThunderYoon Jongshin
← Previous Story EXO’s Lay Donates 10 Ambulances To Hospitals
Next Story → BTS Confirms February Comeback