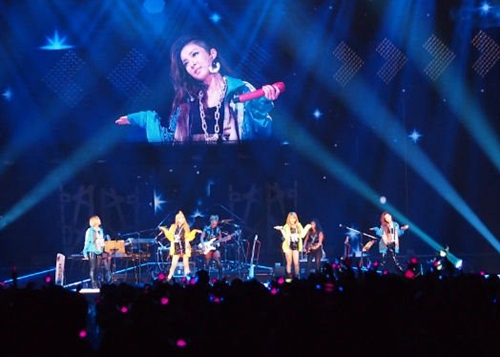 2NE1 has concluded its first showcase in Osaka for the New Evolution tour in Japan on a good note. The concert ran from August 31 to September 2 and received an audience count of over 120,000 total. Despite 2NE1 having performed its last concert in Japan last year, fans continued to support 2NE1 and the band received a lot of support within a short period of promotions.

The concerts featured exclusive live band versions of 2NE1’s hit tracks to execute a fresh feeling and also displayed fine outfits designed by Jeremy Scott. 2NE1 will continue to tour Japan and will hold concerts in Nagoya on September 7 and 8, in Yokohoma on September 11 and in Saitama on September 29 and 30.

Hellokpop, as an independent Korean entertainment news website (without influence from any agency or corporation), we need your support! If you have enjoyed our work, consider to support us with a one-time or recurring donation from as low as US$5 to keep our site going! Donate securely below via Stripe, Paypal, Apple Pay or Google Wallet.
FacebookTwitter
SubscribeGoogleWhatsappPinterestDiggRedditStumbleuponVkWeiboPocketTumblrMailMeneameOdnoklassniki
Related Items2NE1concertJapanese tourJeremy ScottNagoyaNew EvolutionOsakaSaitamaYokohoma
← Previous Story BIG BANG’s Seungri took a picture with rapper Flo Rida in Japan
Next Story → Ottogi Noodle PD tweets photos of JYJ Yoochun receiving a special bracelet