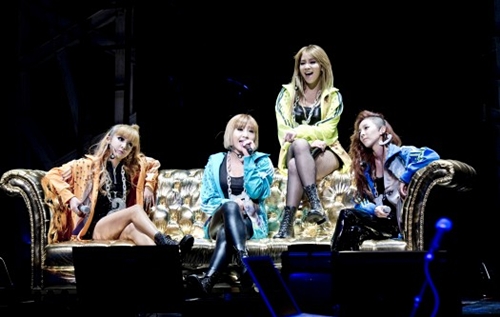 2NE1 talks about experiences in the US

NY1‘s Lewis Dodley sat down with 2NE1 to talk about the band’s recent debut into the U.S. with their two concerts in Newark, New Jersey and Los Angeles, California. Thousands of attendees were present at the concert to support 2NE1 throughout the night.

Leader CL shared that she enjoyed her time on-stage as the audience showed a lot of enthusiasm. She said:

“We had so much fun on-stage and the energy was there and I felt that our fans were having fun and we got their energy.”

There was a short episode included into the concert where Dara kissed a male audience member on the cheek. She revealed:

“Actually it was planned, but the guy didn’t come up, so I had to go down.”

The band was then asked about the importance of achieving success in the States. To that, CL replied:

During the interview, 2NE1 gave credit to producer Teddy Park for their major success in the music industry. CL shared:

“We started with him. He made us, we could say that. And 2NE1, we work with a crew, with our stylist and anybody, and he’s like another member. He’s not with us, but he’s the musical director and he gives us direction for everything.”

Although 2NE1 has a charismatic and bold appearance on-stage, the members are actually quite different in their normal state. CL said:

“We have this alter ego, I think. All four of us do. We have a reality TV show called ‘2NE1 TV‘ and that’s where you can really see who 2NE1 in person really is. You know, if you see that reality show, we’re just like four girls, just four noisy girls. We’re just four normal girls, but on stage we have this side where someone comes out.”

2NE1 works well with kids and before they went to New York to participate in Dodley’s interview, they visited a child care center to play and accompany the children. CL revealed:

“I love kids and I love children, you know? It might seem like it’s nothing, just being there for them, but just hugging them and showing them love is so much to them. I just stayed there for like a couple of hours and they called me ‘Mom. I couldn’t leave, you know? They were crying when I wanted to leave and I want to support them as much as I can and really being there for them is. I realize it’s important.”

CL shared that the band is interested in releasing an English single as it may help them connect with fans who do not understand Korean. Although many of the concert attendees knew very little Korean or none at all, they still enjoyed the concert. CL stated:

“It’s really amazing, but it’s the power of music.”