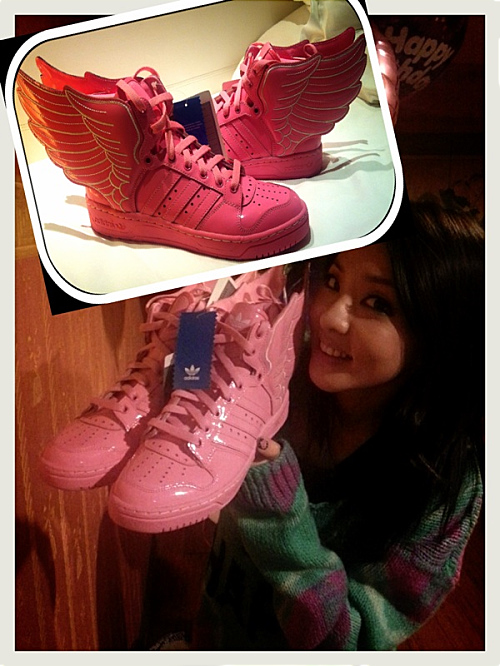 Although 2NE1 member Dara celebrated her birthday earlier this week, the artist only recently unveiled her birthday present which she received from fashion designer Jeremy Scott. Dara uploaded a photo of her gift onto her me2day account and revealed that she had received a special pair of pink winged adidas sneakers. In addition to the image, she posted:

Touched by the present she received, Dara pledged that she would take good care of her shoes as they were personally designed just for her.

Hellokpop, as an independent Korean entertainment news website (without influence from any agency or corporation), we need your support! If you have enjoyed our work, consider to support us with a one-time or recurring donation from as low as US$5 to keep our site going! Donate securely below via Stripe, Paypal, Apple Pay or Google Wallet.
FacebookTwitter
SubscribeGoogleWhatsappPinterestDiggRedditStumbleuponVkWeiboPocketTumblrMailMeneameOdnoklassniki
Related Items2NE1AdidasDaraJeremy Scottme2dayshoes
← Previous Story INFINITE’s SungGyu releases ‘Another Me’ MV teaser + tracklist
Next Story → More K-Pop stars join Australian concert line-up as tickets releases