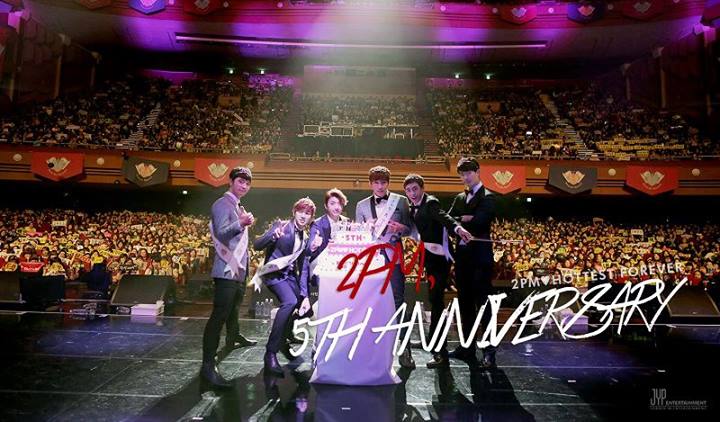 2PM thanks Hottest on their fifth anniversary

Five years ago in September 2008, 2PM debuted under JYP Entertainment. Its members underwent rigorous training as shown in their pre-debut documentary, Hot Blood Men. 2PM was among the first K-Pop groups to debut with a mature concept. From their debut song 10 Out of 10, more hit songs were released through the years, including Again & Again, Heartbeat, Don’t Stop Can’t Stop, I’ll Be Back, Hands Up and the latest tracks, Comeback When You Hear This Song and A.D.T.O.Y. They have also conducted tours in countries in Asia like South Korea, Japan, China, Thailand, Taiwan and Philippines among others.

Five years later, the group remains to be one of the most successful and popular male Korean idol groups. In line with their fifth anniversary, 2PM held a fan meeting entitled The Hottest Awards on September 1. Junho, Nickhun, Taecyeon, Jun.K, Wooyoung and Chansung also left a message to their fans saying “Thank you so much HOTTEST! 2PM♥HOTTEST FOREVER!”.

Congratulations 2PM on your fifth anniversary!

Hellokpop, as an independent Korean entertainment news website (without influence from any agency or corporation), we need your support! If you have enjoyed our work, consider to support us with a one-time or recurring donation from as low as US$5 to keep our site going! Donate securely below via Stripe, Paypal, Apple Pay or Google Wallet.
FacebookTwitter
SubscribeGoogleWhatsappPinterestDiggRedditStumbleuponVkWeiboPocketTumblrMailMeneameOdnoklassniki
Related Items2pmHottest
← Previous Story C-CLOWN’s leader Rome shares a video of him bboying
Next Story → G-Dragon to release world tour DVD of ‘ONE OF A KIND in Seoul’