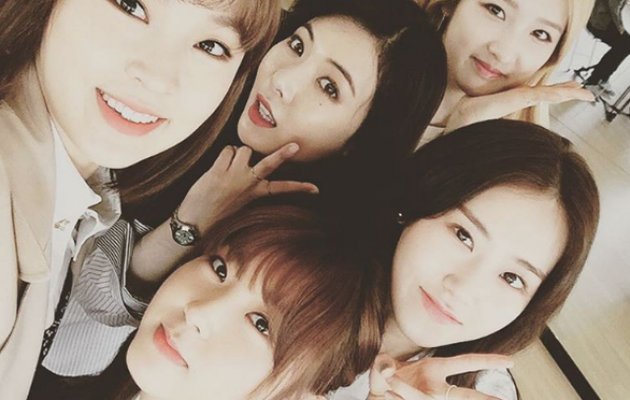 For The Last Time As 4Minute, They Apologize To Fans On Anniversary Day

June 18 marks 4Minute‘s 7th debut anniversary. However, after the news of the group’s disbandment broke, the day was a bittersweet one for members and fans alike. Jihyun, Gayoon, Jiyoon and Sohyun took to their personal Instagrams to thank fans for their unwavering support over the years, and apologized to them as well over the group’s unfortunate end.

Former leader Jihyun reminisced over the past, admitting that the Jihyun 7 years ago was young and nervous. She thanked and relayed her apologies to 4NIAs in her post.

Meanwhile, Gayoon warmed hearts with her handwritten card that said: “Thank you 4NIA”. Her caption expressed her thoughts about 4Minute’s 7-year anniversary, saying: “7 years – it’s difficult to express my exact thoughts into words, but thank you for always staying by our side!”

Jiyoon also got emotional with her Instagram post, cutely imploring their fans to stick with the girls forever with an acrostic poem.

Being a member of 4Minute for the past 7 years, I’ve been able to live happily by making our fans happy. As it did not end well, it fills up my heart with many thoughts of apologies. However, I will repay fans’ love well! I will never forget our fans!”

In the past years, on this day we would express our thanks and gratitude to our fans. But for this year, the feelings of regret are overwhelming. For fans, 4NIAs, who have loved and supported us since the very beginning 7 years ago, I am so grateful to you all, as well as extremely apologetic. Thank you 4NIA!

With the girls’ sincere thoughts to fans, it is evident that 4NIAs are still as important as ever in the hearts of the former 4Minute members.

The group officially disbanded on June 13 after the girls’ exclusive contracts with CUBE Entertainment ended, with Hyuna only resigning with the agency. It was reported that the members had conflicting paths of singing and acting. Cube respected their decisions, and decided to disband for the members to go on their own paths.