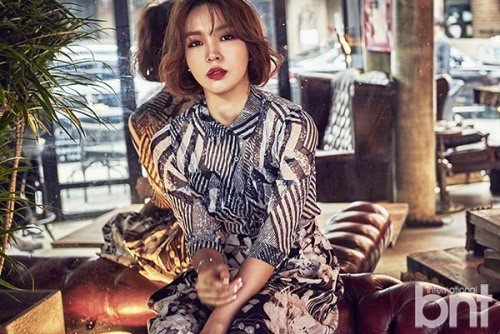 Jiyoon, the former rapper of disbanded K-pop group 4minute, is preparing to debut.

According to her agency JS E&M in a statement released on Wednesday, Jiyoon will be releasing an album titled Day and Night next month.

The album will feature two title tracks I Do and Magnet, which are written and composed by the artist herself. The track I Do represents to “Day” as the reference to the album title, while the track Magnet represents the “Night”.

Jiyoon recently left Cube Entertainment in June after the disbandment of 4minute and is the second former member of the group to release an solo effort ever since. Hyuna released her EP Awesome back in August.

Day and Night will be released on local music platforms on November 1. Thereafter, Jiyoon will have her first fan meeting as a solo artist on November 5.

Hellokpop, as an independent Korean entertainment news website (without influence from any agency or corporation), we need your support! If you have enjoyed our work, consider to support us with a one-time or recurring donation from as low as US$5 to keep our site going! Donate securely below via Stripe, Paypal, Apple Pay or Google Wallet.
25
SHARES
FacebookTwitter
SubscribeGoogleWhatsappPinterestDiggRedditStumbleuponVkWeiboPocketTumblrMailMeneameOdnoklassniki
Related Items4MinuteCube EntertainmentJeon Ji-yoonunpretty rapstar
← Previous Story B.A.P’s Bang Yong Guk To Halt Activities Due to Panic Disorder
Next Story → BTS Becomes First K-pop Group To Spend Two Weeks On Billboard 200