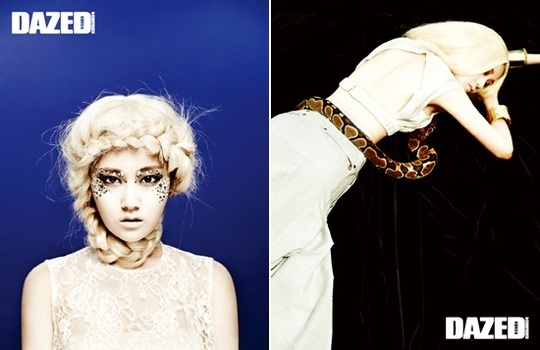 Photos of 4Minute‘s Heo Gayoon with a snake has been made public.

On the 20th of July, published photos of Heo Gayoon appeared in the August edition of UK-licensed fashion magazine DAZED & CONFUSED KOREA wearing clothes from a luxury line and striking an alluring pose.

The concept of the photo shoot was that of a female in love with a snake. Gayoon is seen in the first photo with braided hair coiled round her neck, creating the impression of a snake wrapped around her face. In the  second photo, she appears with a 2m long snake that seems to be twined round her body and is approaching her face, producing a shocking visual.

Gayoon, who is seen as a fashion icon on the Internet, created a buzz on the shooting site with her ability to wear various types of clothes with the capability and aura of a model.

In the interview with DAZED & CONFUSED, Gayoon revealed that she has “always wanted to do an intense photo shoot with an unusual concept” and that “the idea of a photo shoot with a snake was proposed by [her]”. She also frankly confessed that “although [she] professes that [she is] a ‘Gangnam female’ with a strong interest in fashion, [she] feels even more deeply the burden that comes along with having to wear the clothes well”.