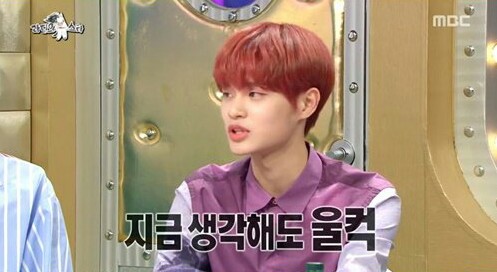 Photo from MBN/Screengrab from MBC

AB6IX’s Daehwi revealed what happened behind the scenes during Wanna One’s final concert together – and it will break your hearts!

AB6IX’s Daehwi looked back on his last days as a member of Wanna One and revealed some stories that left fans feeling fragile during his recent guest appearance on Radio Star!

The singer was once part of the very successful Produce 101 Season 2 project group Wanna One. He joined the panel of MBC’s entertainment variety show Radio Star in an episode which aired on June 6 KST. During his guesting, Daehwi talked about various things. With his memorable one-year-and-a-half-long history with the group, it was inevitable that he also talked about his time with them.

Unfortunately (or fortunately) for fans of Wanna One, the young vocalist shared some stories about his last days with the group.

READ: Lee Daehwi Says He’ll Work Harder To Receive The Same Love He Received As A Member Of Wanna One

The singer reminisced about the most heartbreaking date for Wannables – January 27, 2019. The date was when Wanna One members themselves cried non-stop. “I will remember that exact date of January 27 always – because everyone cried a lot,” he said.

“We had a four-day concert leading up to it, and all the members burst into tears on the last day,” the singer added. Daehwi was pertaining to their concert in Seoul’s Gocheok Sky Dome. Titled Therefore, the showcase ran from January 24 to 27 earlier in the year.

READ: Therefore, We Were One: Fans Thank And Promise To Never Forget Wanna One In Touching Messages On Twitter

Daehwi also specifically mentioned one of his groupmates, whose overflow of emotions was something he couldn’t forget. “Kang Daniel even gathered all of the staff members, especially the make-up artists. He held on to them and cried so much,” the singer revealed.

“Even when I think about it now, I feel emotional because I keep remembering how everyone cried a lot,” he also shared earnestly.

Hellokpop, as an independent Korean entertainment news website (without influence from any agency or corporation), we need your support! If you have enjoyed our work, consider to support us with a one-time or recurring donation from as low as US$5 to keep our site going! Donate securely below via Stripe, Paypal, Apple Pay or Google Wallet.
FacebookTwitter
SubscribeGoogleWhatsappPinterestDiggRedditStumbleuponVkWeiboPocketTumblrMailMeneameOdnoklassniki
Related Itemsab6ixab6ix daehwiKang Danielwanna onewanna one daehwi
← Previous Story MONSTA X’s Shownu To Showcase Golden Variety Idol Skills On tvN’s “Amazing Saturday”
Next Story → “Sunshine Family” Cast And Director Share Insights & Challenges On Working In A Cross-Cultural Film