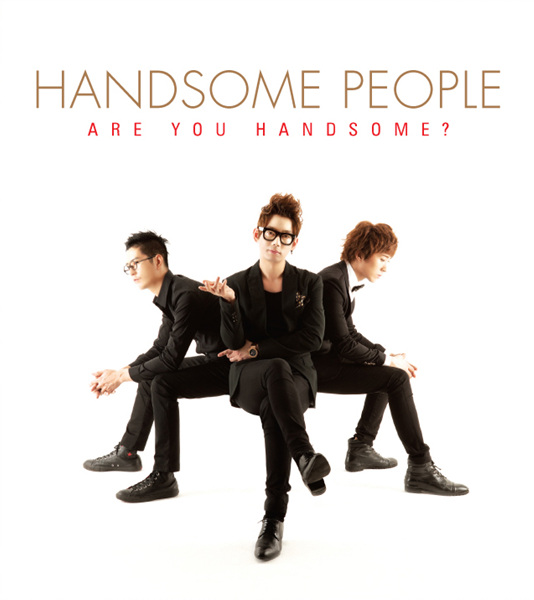 As far as niche genres go, acid music is relatively accessible. Individual bands’ mileage may vary, but the recent attention garnered by artists like Urban Corner and Crystal Rain seem to show that this genre can still be successful in today’s Korean market. From the public-appeal perspective, Handsome People have the right idea: take a brand of acid closer to rock than jazz, polish up the sound, and add engaging melodies. (Tei‘s still-palpable name value doesn’t hurt to have either.) From a musical perspective, the formula  looks like a sure thing. It turns out that Are You Handsome?, the band’s first studio album following three 2011 singles, delivers exactly what you’d expect it to – along with something you wouldn’t.

When it works, the album is almost faultless. The three veterans, keyboardist Choi Young-ho, guitarist Um Joo-hyuk and former guitarist Tato are responsible for the sounds heard in Are You Handsome?, which are on the whole sophisticated yet catchy enough to rival pop music. Relentless and funky guitar, lively piano, and energetic synths color the album’s best tracks. Electronic sounds are featured prominently; acoustics and rock tones are used sparingly but played well.

Handsome People’s strengths are best displayed in its up-tempo tracks. Choi (who composed most of the album) excels at crafting exhilarating atmosphere and as a result, lead single Woowei Woowei‘s ascending chorus melody and Crazy‘s back-and-forth, passionate-and-dandy dynamic are truly memorable moments. Shall We Dance is more subtle, but its Jamiroquai-inspired (“inspired” being an understatement) riffs and jazzy instrumentation make for a deliciously seductive mood. The titular string-based sound set takes over Disco Girl to danceable results, and while not as strong as the previous mentioned tracks, Hands Up People and Beautiful still offer pretty decent club sound.

The second part of the album, however, betrays a crucial problem. This is where Are You Handsome?’s ballads and lighter tracks reside, and these are decidedly bland compared to the tracks above. Essentially, take away the tempo and the album becomes pedestrian. Part of it is the choice of instrumentation: Tato’s guitar and Choi’s keyboard work that shine in the up-tempo portion are either absent or relegated to minor roles here, taking away the album’s greatest asset sound wise. But at the core, tracks like 넘 그러지 마요 (Don’t Be Like That) and You are simply disappointingly trite. It was a highly questionable choice to include these tracks to begin with – not only do they go against Handsome People’s professed identity as an acid pop band, but they actively undermine the album’s consistency and quality. For the sake of consistency in particular, the fact that a rock remake of Tei’s 같은 베개 (Same Pillow) (2007) concludes the album is borderline disastrous.

Speaking of Tei, he has been open about his fondness for rock music ever since his rookie days, and his experience as a band vocalist in high school doubtlessly helps him perform this album effectively. Interestingly, he sings Britpop track 고장난 소년 (Broken Boy) and alternative rock number You much like he did his ballads: it’s the jazzy tracks that have Tei changing things up. The vocal performance is critical to making Crazy work, as the song’s dynamic involves lots of abrupt mood shifts and gradients of emotion; Tei responds by stretching his vocals out like we’ve never heard before. In Woowei Woowei, he is noticeably more abrasive, and in I Wanna Be, he punctuates often and introduces groove.

For all its strengths, Are You Handsome? is ultimately deflating. When this band came out of the left field last year with Shall We Dance and followed up with Crazy, it seemed a revelation. These guys were filling the spacious acid niche; they could be a second Clazziquai or Peppertones perhaps, imbibing interest to a whole genre. I don’t want to discount the possibility that they still could; the talent is proven, as is the product. But it seems that Handsome People (and Fluxus Music) must first figure out a more coherent identity before this band can truly go anywhere.

We need your support! If you have enjoyed our work, consider to support us with a one-time or recurring donation from as low as US$5 to keep our site going! Donate securely below via Stripe, Paypal, Apple Pay or Google Wallet.
FacebookTwitter
SubscribeGoogleWhatsappPinterestDiggRedditStumbleuponVkWeiboPocketTumblrMailMeneameOdnoklassniki
Related ItemsAre You Handsome?Choi Young-hoClazziquaiCrystal RainFluxus MusicHandsome PeopleJamiroquaiPeppertonesReviewTatoTeiUm Joo-hyukUniversal Music KoreaUrban Corner
← Previous Story EXO to promote in Thailand
Next Story → A-Prince releases pre-debut MV ‘You’re the Only One’