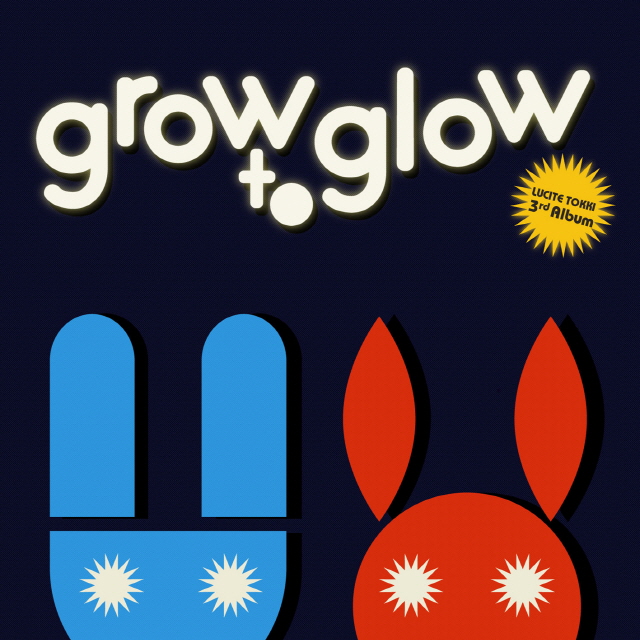 It’s difficult to imagine bands like Rooftop Moonlight, Lalasweet, or f(x) abandoning their musical style to do something else. These are examples of artists that not only have established some musical consistency, but have then made that music into an identity inseparable from their own images. And so it is with Lucite Tokki. Their style is light, bubbly, acoustic, amiable; it’s rather difficult to imagine any otherwise. Five years since debut, this intrepid rabbit-themed duo aims to change those perceptions with Grow To Glow.

The album’s two opening tracks waste no time in getting that purpose across. The Way and Free surprise firstly with unexpectedly blunt sounds (funky, unkempt piano rock and synths in unusual rhythm) and secondly with equally blunt lyrics that sing of self-determination and ambition. Appropriately, both are fluidly structured – the overwhelming impression is that of liberation.

Grow To Glow is that kind of album. It goes to all kinds of places, but all of it is focused on escaping the clean-cut boundaries of Lucite Tokki’s past works. The aforementioned couple tracks are probably the most jarring, but even reassuringly acoustic tracks are edgy and heavy. Before we go further, there is one exception: Go, which was released as an unfinished single last year, does retain the infectious brightness of the band’s past. The song’s echoing chorus was an ingenious idea then, and still is now; the 2012 edition adds a breathtaking second layer of vocals to the final minute.

Besides Go, the album’s best moments come when Lucite Tokki experiments with sound. Summer (another reupholstered single from 2011, and an honorable mention pick in the Best Rock Song category of my 2011 year-end series) is just a few steps away from post-rock, what with its electric ambience and repetitive, diffusive guitars. The dreamy melody is accompanied by gorgeous words (“This summer’s illness won’t be stopped // This summer’s you won’t be reaped”) that convey both exuberance and unease. The duo then goes for rhythm with I’m Here‘s staccato piano, which gives way to suffocatingly unbroken guitar and synthesizer halfway in. It’s a bold and reassured melody, and Cho Ye-jin‘s vocalizations melt away into its inexorable movement.

Lyrical content is generally not so experimental here, but the topics that Cho and Kim Sun-young write about are still novel. The devastating honesty in Time To Grow‘s self-evaluation is as determined as it is incisive, while Noisy Childhood borrows the voice of another narrator in telling us perhaps the core idea of this album: “I think I already know // Don’t need you to define me // I’m just fine”. The evocative language of Summer and Last Night In My Dream resuscitate hackneyed situations and stories.

There’s nothing really bad about this album. I could say that a majority of its tracks are not truly memorable, but at that point I’m applying an unfair standard. A better (but still nitpicky) criticism would be that it’s not very emotionally engaging. The album is so engrossed in itself – with Lucite Tokki’s growth and maturation – that it doesn’t spare much relatability for the listener. But I suppose that’s sort of the point. I think this album is for Cho and Kim as much as it is for listeners, and it performs well in its one purpose aimed for the latter: I came out of Grow To Glow with a different perception of Lucite Tokki than I went in with. Namely, with a lot more promise than before.