ATEEZ thrilled ATINYs worldwide by announcing their plans to host an online comeback show for their upcoming album, ZERO: FEVER Part.1. This is one of the group’s many efforts to host events digitally in accordance with safety measures in place due to COVID-19. Moreover, the event offers an opportunity for global fans to partake in the comeback fun!

Airing July 28 at 11 pm KST on MyMusicTaste’s platform, the comeback show will run for three hours. ATEEZ will reveal their title track, as well as an explosive new performance. Additionally, the members will divulge in behind-the-scenes stories regarding their narrative worldview seen in their recently released “Diary Film” as well as exclusive new video clips.

The summer fever is soon to be cooled down with ATEEZ AIR CON <ZERO : FEVER Part.1>

The event sales first begin on July 13 for members of their official fan club. Early bird tickets sale will start on July 16 11:00 AM KST, on MyMusicTaste.com.  Further information regarding ticketing and the show itself can be found through https://mmt.fans/itVe or through other social media channels of MyMusicTaste.

Adding to the excitement even further, ATEEZ also launches a fan vote for their title track. The group released an intriguing teaser poster with the two title track possibilities, “Inception” and “THANXX”. This vote is the second held by ATEEZ, who hosted their first vote during Treasure EP. 3: One to All promotions. 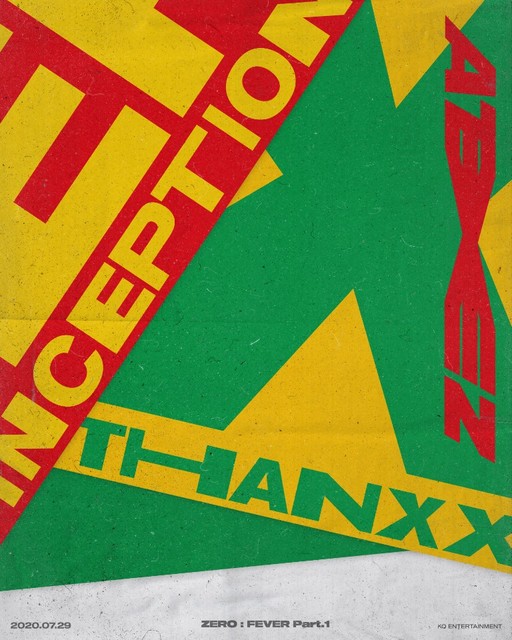 The voting begins on July 14 and will last for a week. ATINYs will vote on the narrative storylines, the song previews, and the performance preview videos of the two tracks to help decide the title. After a round of voting by ATEEZ themselves, the title track will be finalized. The results of the vote will air during their online comeback show on July 28. Subsequently, its music video will release on July 29.

ATINY!
It is this time of the year again! ?
Since they trust your insight, #ATEEZ is asking you to vote with them for the song they will promote next!

After debuting in October 2018, ATEEZ kept themselves busy and continually challenged their creative impulse by releasing over 4 mini albums and 1 full album in a span of a year.

The January release, Epilogue: Action to Answer perfectly wrapped their epic Treasure Saga, and fans and the music industry are now sitting tight for the start of a new era with the upcoming ATEEZ ZERO: FEVER PART 1 set for release on July 29, 6PM.

After selling out their first world tour “The Expedition Tour” earlier in 2019, ATEEZ have upgraded from a thousand capacity theater show to an arena show for their now postponed world tour <The Fellowship>: Map The Treasure, solidifying their status as K-pop’ next worldwide phenomenon.

The band’s well-crafted performances and producing skills received worldwide attention, both from the fans and the media by being featured on Billboard, MTV, The Grammy, DAZED, and many more outlets around the world.

The group will make their widely anticipated comeback with ZERO: FEVER Part.1. on July 29 at 6 pm KST.