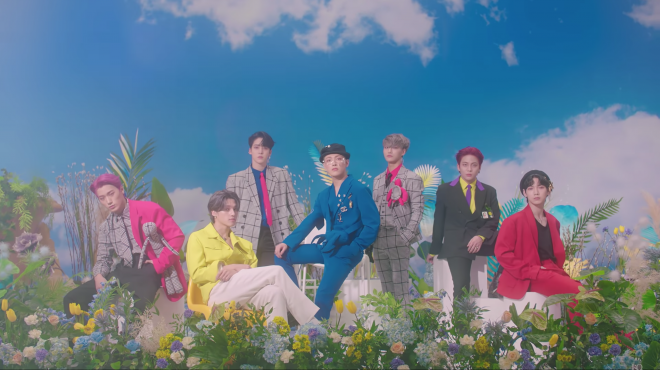 ATEEZ Hints Towards Their Expanding Worldview During Their Concept Teaser For “ZERO: FEVER Part.2”

ATEEZ surprised fans with a concept teaser for their upcoming comeback with their album, ZERO: FEVER Part.2. Despite being a little over thirty seconds, the teaser delighted fans with numerous hints to be unpacked regarding the group’s worldview.

The teaser begins with the idyllic sounds of birds chirping and slow-panned shots of vibrant flowers. However, the instrumental track at the back underscores the otherwise vibrant video with an ominous sentiment. Starting with high piano keys and the metallic clicking sounds similar to a wind-up toy, the track quickly unsettles viewers.

Fans of the group can recognize the melody which was first teased at the end of ATEEZ’s last music video for their second title track, “THANXX”.

A Menacing Vision of Utopia

Paired with the mysterious sounds of the video was ATEEZ themselves. The members sat frozen within a utopian garden, gazing into space in different directions. Suddenly, all members turned their heads to look directly into the camera, intriguing fans.

The teaser parallels hints of the group’s integration of a puppet concept for their upcoming project. As of late, ATEEZ highlighted their inspiration of puppeteering within their choreographies, such as during the dance break during the recent Seoul Music Awards.

With the sounds of the wind-up clicks in the background, the members’ frozen state, and their sudden movement towards the camera, many suspect that their newest project will explore this puppet inspiration even further.

Further unsettling viewers are the members’ blank gazes into the camera. The final scene shows an unknown members’ eye, reflecting roaring flames. Punctuated with the sounds of a crackling fire, the ending hints towards possible destruction to this utopian garden, and recalls the fire-scenes from ATEEZ’s previous music video, “Inception”.

Despite its short length, the concept video makes way for many questions regarding ATEEZ’s expanding worldview, and how their new project relates to the narrative storyline explored thus far.

Fans can keep up with ATEEZ’s comeback through the official scheduler. ZERO: FEVER Part.2 will drop on March 1 at 6 PM KST.