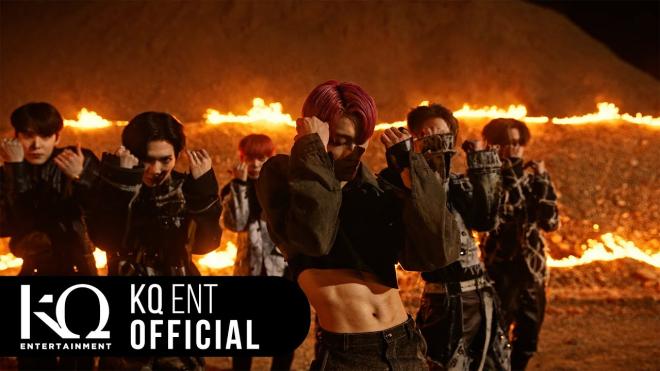 ATEEZ confidently proclaims, “I’m the one in my zone” in the fiery performance teaser for their upcoming title track “Fireworks (I’m the One)”, setting the internet aflame.

ATEEZ thrills in their heated performance teaser for their forthcoming track, “Fireworks (I’m the One)”. The song is the title number of their upcoming comeback album, ZERO: FEVER Part.2. If the teaser is any indication of what’s to come, fans can anticipate the group’s most confident and explosive work yet.

The video began with the same melody first teased in the “THANXX” music video from ATEEZ’s last comeback. The ATEEZ members circled their leader, Hongjoong, against a dirt background with rows of flames lining the hills.

Seonghwa burst forth from the circle singing, “I’m the one in my zone”. Fans can recall the line from a prior teaser poster released across the group’s SNS channels. ATEEZ then proceeded into new choreography, catching attention with its puppeteering inspiration seen from their prior stages.

Some of ATEEZ’s most unmatchable qualities are the strength of their performances and their powerful expressions. In this blazing performance teaser, the group continued to show their superior stage presence and charisma as individuals and as a team. ATEEZ broke away from the fast tempo of the choreography in a slow “killing part” led by San, leaving viewers enraptured.

Fans were delighted to hear the next rap verse led by Mingi. Opening with his signature “Fix on”, the quick verse raised the energy. Despite taking a break for health reasons, ATEEZ displayed their warm teamwork as Hongjoong represented Mingi in the video.

During the chorus, the group sang, “Playing with fire / don’t stop us”, an apt representation of ATEEZ’s burning career ambition. Punctuated by the heavy bassline and grand drums, the fast melody of the track emphasized the passion of their performance.

Although the video is only a short teaser for the title track, many fans are in a fever of anticipation. Self-assured and promising to set the industry alight with their newest project, ATEEZ hints at an incredible upcoming release.

ATEEZ will make their comeback with ZERO: FEVER Part.2 on March 1 at 6 PM KST.