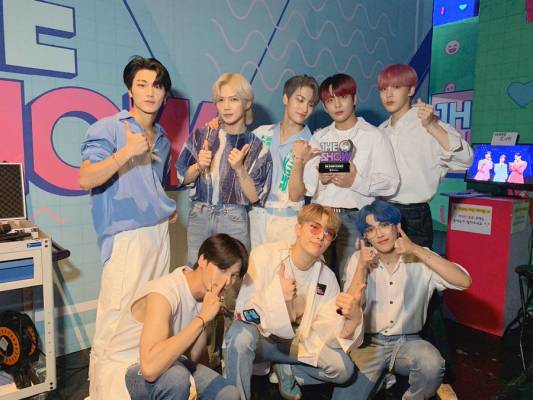 On August 4, leading boy group ATEEZ claimed their third win during SBS’ music broadcast, “The Show”. This marks yet another impressive achievement in the wake of their comeback with their fifth mini-album, ZERO: FEVER Part.1.

Only five days following its release, the group’s title track, “INCEPTION”, boasted incredible physical sales and streams resulting high scores during the broadcast. Paired with an intense round of live voting from ATINYs, ATEEZ emerged victorious as this week’s winner on The Show.

The group offered fans their heartfelt thanks for trusting and waiting for ATEEZ during their comeback preparation. Their leader Hongjoong ended their speech thanking their family and staff while promising fans that they “We will become ATEEZ that works harder in the future”.

ATEEZ’s success following their comeback is on a remarkable increase. In just 27 hours, their album achieved over 200, 000 sales and the music video for “INCEPTION” surpassed 10 million views in under 24 hours. The video is on track to hit 30 million views within only a week of its release.

Notably, news of their win topped the worldwide Twitter trends as well as domestic Twitter trends in South Korea. While the group has always depicted immense global power with popularity at home and abroad, it is increasingly evident this comeback that ATEEZ are quickly establishing themselves as a known worldwide name.