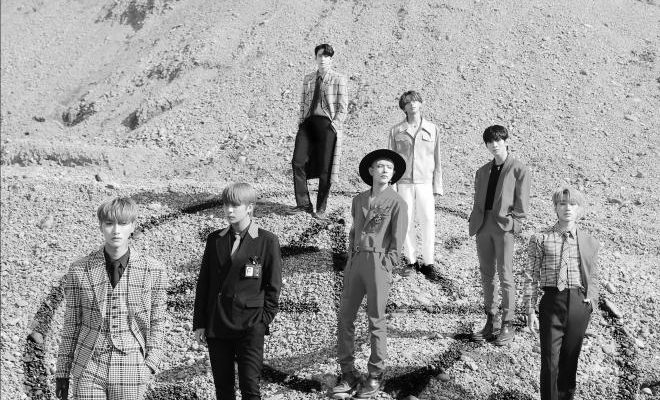 ATEEZ signals an interdimensional turn for their upcoming comeback, taking fans on a thrilling pirate journey through time and space once more.

ATEEZ enraptured fans with the newest concept video teaser for their upcoming comeback with ZERO: FEVER Part 2. Despite the prior colorful teasers released thus far, many suspected a darker turn considering the images’ ominous undertones. However, no amount of anticipation could adequately prepare fans for the group’s newest concept video released–which was perhaps their most menacing teaser to date.

The short but dense teaser included a plethora of provoking scenes and hints regarding ATEEZ’s worldview.

Donning a similar backless outfit seen during ATEEZ’s 2020 MAMA performance, San opened the teaser by carrying a fire torch, delivering a mysterious gaze past his shoulder. The intriguing pattern written on his back captivated fans and suggested a hidden code.

The darker styling continued for other members. Yunho wore black leather, a lip ring, and “FEVER” scrawled on his finger along with a heartbeat. Meanwhile, members Hongjoong and Seonghwa elevated the teaser’s alluring atmosphere, sending secretive but powerful gazes to viewers. Jongho and Wooyoung seemed contemplative, even troubled in thought. Yeosang concluded the members’ scenes, sending a final, mystifying glare into the camera.

Fellow KQ label-mate, Maddox, narrated the video. He seemed to describe the events of ATEEZ’s worldview that may be explored during their comeback. Outlining a journey of the members who battle overwhelming darkness, the final line foretells, “the fiery voices of the boys broke the silence and awaken the world”.

To wrap up the cinematic video, ATEEZ included a short audio snippet. The snippet expanded the previously-teased melody from the ending of their music video for “THANXX”. At its end, the clip showed a sole chair in the middle of the desert with a red filter, hinting towards more menacing times to come.

“Zoom in here, cause I’m the captain”

Shortly after the concept video, ATEEZ surprised fans by dropping an extra teaser outside of their set comeback scheduler.

In the new images, the group signalled a return to their “Say My Name” era. A poster highlighted lyrics from the title track, “Zoom in here, cause I’m the captain”. Moreover, it displayed new hourglass symbols including moon phases. The symbols connect to the hint provided in FEVER ROAD that ATEEZ travels through dimensions and time using the moon phases.

The poster draws questions on how their “Say My Name” era inspired or may connect to ATEEZ’s upcoming project.

Furthermore, the post highlighted leader Hongjoong with his individual shot. The caption, “I’m both the leader and captain”, summons attention regarding the importance of his roles within ATEEZ’s narrative worldview develops. Additionally piquing curiosity is the group image of the members standing amidst the new hourglass symbol. All stand within the circle except for Seonghwa, raising suspicion for its possible symbolism.

Hold up!
I'm both the leader and captain.

Following every comeback teaser, one thing becomes increasingly evident: ATEEZ will deliver their most complex, rich work yet.

A little over two years since their debut, the group built a wonderous storyline of pirates, doppelgangers, interdimensional time travel, and youth through their music. Now, as the threads of their worldview may begin weaving more intimately than ever, ATEEZ will take fans on another unforgettable journey.

ATEEZ will deliver their comeback on March 1 at 6 PM KST with their sixth mini-album, ZERO: FEVER Part 2.