ATEEZ will partner with the global fandom platform, UNIVERSE, once again to launch an all-new entertainment program titled Parasite Challenge Double Up ATEEZ. 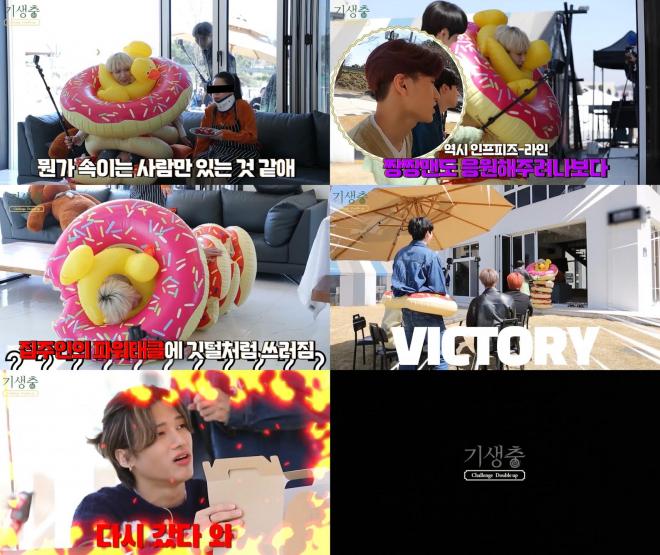 The new show is an upgrade based on UNIVERSE’s original, Parasite Challenge, which captivated many fans. In this upgraded version, fans can enjoy the entertainment from the first series on a whole new level as artists’ intuition and synergy are put to the test during challenging missions against landlords.

UNIVERSE released an exclusive teaser on their YouTube channel, teasing fans for the fun to come. During the video, ATEEZ began the “Refrigerator Breaking Mission”, attempting to steal ingredients for a meal from a kitchen, without the evil landlord noticing. In a hilarious twist, the members must participate in the challenge covered head-to-toe in donut tubes.

ATEEZ leader, Hongjoong, struggled with the tubes during his attempt and encountered the landlord, sparking laughter among viewers. The anticipation of whether ATEEZ will gather all the ingredients for a delicious tteokbokki meal, while escaping the wrath of the landlord is keeping fans on their toes.

Many are paying sharp attention to the development of the series that will reveal itself during the release of the full episode.

UNIVERSE ORIGINALS have become a fan-staple for fans within the K-Pop community. With these original series, the fandom platform delivers new and creative entertainment concepts. The shows provide laughs to fans while connecting them to their favorite artists, all at once.

Meanwhile, Parasite Challenge Double Up ATEEZ consists of eight main episodes, with one behind-the-scenes episode. The show will air every Wednesday and Friday on the UNIVERSE app, premiering at 10 AM KST on September 22.