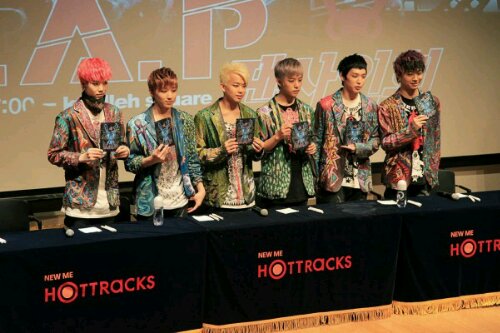 The VIP tickets were sold in several stores on June 30 at noon and fans lined up prior to the availability of the tickets in hope to get their hands on a pair.

A representative from G-Music said, “Since the VIP tickets have been released, we’ve been receiving overwhelming number of inquiries from fans and interview requests from foreign media outlets. It is very unusual for a newbie idol group to get this much of a hot response.”

B.A.P will perform at the 2012 K-POP NATION CONCERT today in Macau along with SNSD, SHINee, and U-KISS.

FacebookTwitter
SubscribeGoogleWhatsappPinterestDiggRedditStumbleuponVkWeiboPocketTumblrMailMeneameOdnoklassniki
Related Items2012 K-POP NATION CONCERTB.A.P.G-MusicSHINeeSNSDTS EntertainmentU-KISSVIP
← Previous Story 2012 KCC Hallyu Fest to be held in the Philippines with Boyfriend as special guest
Next Story → U-KISS to perform at Budokan in September