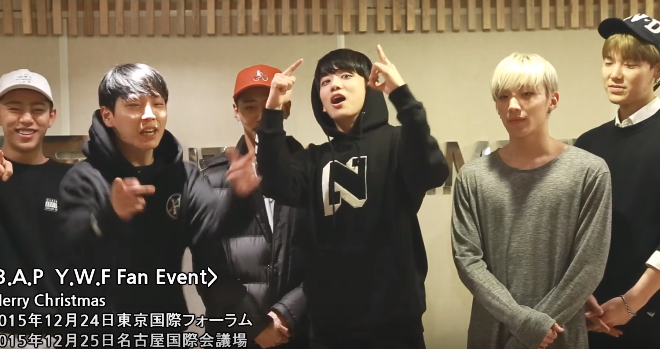 The B.A.P members are excited over their coming fan meetings in Japan in the newly released video message.

As previously reported, B.A.P will head to Japan to hold a series of fan meetings in Tokyo, Nagoya and Osaka during this Christmas and New Year. The boys just dropped a video message to announce the highly-anticipated events to fans.

In the video, the boys also never forget to be fun and hilarious by repeating Youngjae’s words. They are all pumped up and ready to meet fans in Japan in December and January.

Hellokpop, as an independent Korean entertainment news website (without influence from any agency or corporation), we need your support! If you have enjoyed our work, consider to support us with a one-time or recurring donation from as low as US$5 to keep our site going! Donate securely below via Stripe, Paypal, Apple Pay or Google Wallet.
20
SHARES
FacebookTwitter
SubscribeGoogleWhatsappPinterestDiggRedditStumbleuponVkWeiboPocketTumblrMailMeneameOdnoklassniki
Related ItemsB.A.P.ChristmasFan meetingJapanNagoyanew yearOsakaTokyo
← Previous Story FameUS Ready To Rock The Stage of Tokyo This December
Next Story → Luhan Shows His Rapping Skills In English Track “Lu”