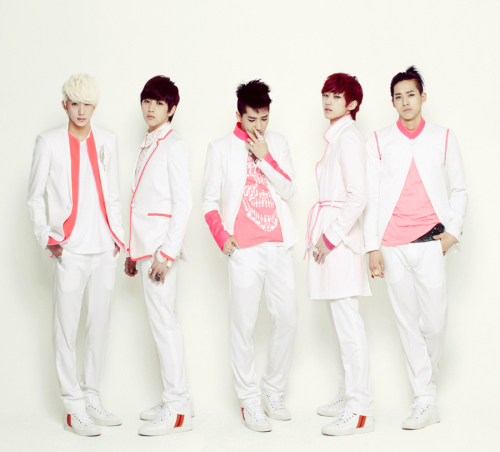 The members of B1A4 attended July 19’s performance of the Brothers Were Brave musical to display their moral support for participating member San Deul.

“We became choked up after we saw San Deul singing and acting onstage. We’re proud to see him working hard for himself and the team after being cast in such a great piece.”

Although San Deul has performed live numerous times, the member revealed that he felt nervous. He said:

“I repeat ‘be calm’ to myself before going onstage, and that takes away most of my nervousness. At first I thought it was hard that [musicals] mix acting and singing, but I started to become more comfortable with the idea after starting to think that everything is acting and trying to concentrate on getting my lines through.”

San Deul plays the role  Joo Bong, the stubborn younger brother who hates his older brother Seok Bong and father Chun Bae. In Act 1, a supposed ‘lawyer’ reveals that the father has hidden a winning lottery ticket somewhere in the house and the two brothers split up the house in search of the ticket. Act 2 revolves around the unknown past of the mother Soon Rye‘s death which ultimately leads to the reconciliation between the brothers.

Read the summary of Brothers Were Brave here.