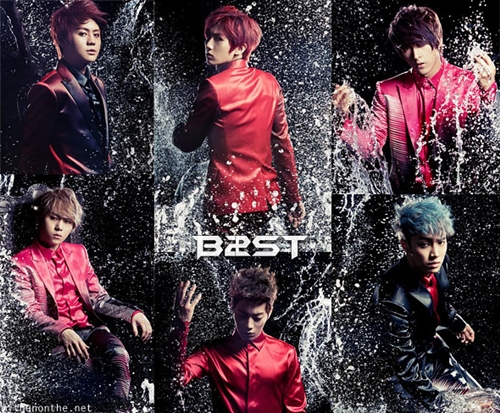 BEAST has officially released the character images for their upcoming comic THE BEAST, which we reported on before. Artist Jenna found her inspiration to create the look of the characters through the band’s Midnight Sun concept.

Gikwang possesses the power of telekinesis and is portrayed as a dark character; his clothes are colorless and his facial expression is grim. The character representing Dongwoon is a calm and innocent looking college student who has a photographic memory. Doojoon possesses exceptional skill in soccer and is bestowed with the power of hyperkinesis. Yoseob appears to look innocent with blond hair, a top hat, and microphone but can create illusions. Junhyung is  a mysterious character with black hair and an unbuttoned white shirt who can read others’ thoughts. Hyunseung sports red hair and a laid-back look but actually has the power of teleportation.

The first volume of the series, THE BEAST – The Beginning of Destiny, will be released on the 22nd of August. Take a look at the character images below.