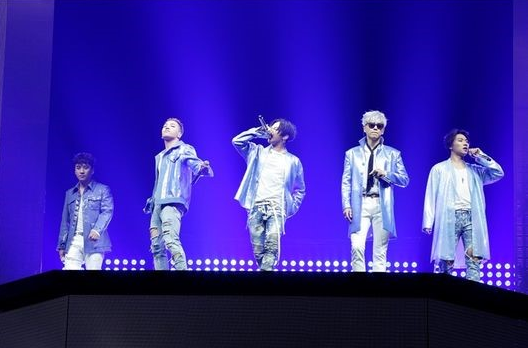 BIGBANG’s Japan Dome Tour: A History In The Making

BIGBANG is the first ever foreign artist to stage the dome tour four years in a row!

BIGBANG‘s ‘Japan Dome Tour’ kicked off at a higher notch last November 5 and 6 at Tokyo Dome with a sold-out audience estimated to be 55,000 in attendance.

The audiences were enthralled with the group’s series of hits that spans its 10-year music career. The boys brought back nostalgia, while at the same time, with energetic performances onstage that kept the audience’s expectations at an all-time high.

YG Entertainment’s Head Producer Yang Hyun Suk and members of Sechkies were among the notable attendees of the concert. Later, Yang Hyun Suk uploaded a photo of BIGBANG with Sechkies on his Instagram profile.

BIGBANG’s front man G-Dragon and Rapper T.O.P had words to express the love and support they had received from fans throughout the years.

G-Dragon: “I believe the climax of the ten years of BIGBANG is today. A lot of things have happened along the way we’ve come here today, but we could overcome those all thanks to the members and you, fans. I really thank you.”

T.O.P: “These days, I’m surprised by how fast time flies. With the time, good memories with you are also building up, so my heart is filled with joy. For me personally, this concert at Tokyo Dome might be my last visit to Tokyo, so each and every one of you here is all the more important to me. Please look forward to the upcoming new album of BIGBANG.”

‘BIGBANG10 THE CONCERT : 0.TO.10 – THE FINAL Japan Dome Tour’ continues to make its rounds in the following venues and dates below: