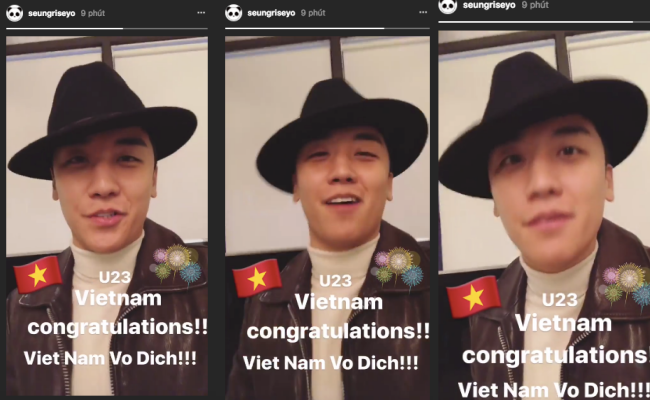 K-pop fans in Vietnam are the ones who are happiest with this news.

BIGBANG’s Seungri recently uploaded some photos, featuring memorable moments of Vietnam’s national football team Under-23 at 2018 AFC U23 Championship, to congratulate its impressive achievement at the international sports event this year.

After the final game with Uzbekistan in China on January 27, Vietnam U23 wrapped up its journey at 2018 AFC U23 Championship as the runner-up. The achievement was meaningful to the Southeast Asia country as it marked a long-awaited decade since the team won the honorable trophy at the 2008 AFF Championship.

Along with the pictures, BIGBANG’s member sincerely offered his congratulations to Vietnam, as well as expressed his admiration for the team’s head coach Park Hang Seo in both English and Vietnamese.

In addition, Seungri also uploaded a video onto his Instagram story to show his happiness for Vietnam’s triumph. It is noted that he excited fans by concluding his self-recorded clip with a meaningful sentence: “Việt Nam vô địch”, which means “Vietnam champion”. Besides, the BIGBANG member also promised to visit the country in the near future.

Hellokpop, as an independent Korean entertainment news website (without influence from any agency or corporation), we need your support! If you have enjoyed our work, consider to support us with a one-time or recurring donation from as low as US$5 to keep our site going! Donate securely below via Stripe, Paypal, Apple Pay or Google Wallet.
FacebookTwitter
SubscribeGoogleWhatsappPinterestDiggRedditStumbleuponVkWeiboPocketTumblrMailMeneameOdnoklassniki
Related ItemsBigbangSeungriU23 Vietnam
← Previous Story Astro’s Cha Eun Woo Thanks “Music Core” For Wonderful 1 Year & 5 Months Memories
Next Story → Five Members Of 2PM Renew Contracts With JYP Entertainment