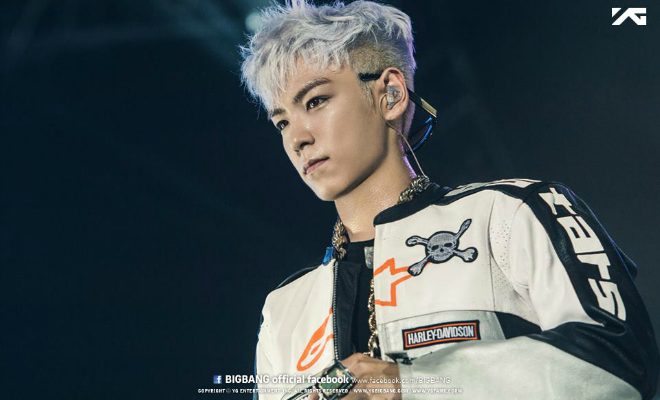 BIGBANG’s T.O.P Under Investigation Over Marijuana Use + Fans Promise To Stand By Him

Korean rapper and member of BIG BANG, T.O.P is currently facing probe over marijuana use, according to a local news outlet.

According to reports, the rapper tested positive for marijuana after Seoul Metropolitan Police Agency’s drug crime unit conducted a drug test on him. YG Entertainment, which represents T.O.P, has acknowledged the allegations and issued a statement regarding the issue.

“It is true that T.O.P smoked marijuana before the enlistment and we sincerely apologize for the outcome,” the agency said. It added that the BIGBANG member is regretting his wrongdoing.

T.O.P, who is currently serving his mandatory military service in the band unit of the Seoul National Police Agency, reportedly smoked marijuana at his home three times with an unnamed female trainee in October 2016. The said trainee was also tested for marijuana use and has been investigated by the police.

The rapper’s marijuana case has been turned over to the prosecutors.

Fans, on the one hand, expressed support for the BIGBANG member. One fan wrote that the group has survived previous controversies such as G-Dragon‘s marijuana use in 2011 and Daesung‘s car accident. The fan is also optimistic that this issue will also be won over. “This is another phase for us to be stronger,” the fan added.

Another called out fellow VIPs to “stand together and support” the rapper, while one fan vowed to “stay” and “go through” the ordeal with him.

This is the time where we have to stand together and support TOP ? Remember, VIP till whenever #IamherewithyouTOP #StayStrongVIP pic.twitter.com/bueBtSL4zP

I'm not defending TOP but I'll stay here & go through this with him together.So,if I see haters or people quoted them,I'm muting &blocking!