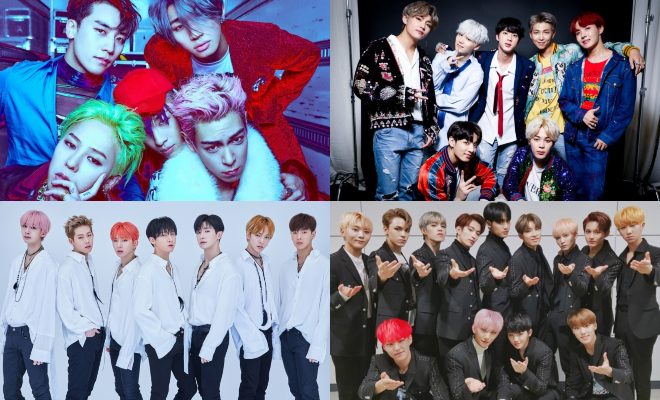 Billboard Lists The Most Anticipated K-Pop Albums of 2019

Billboard publishes the top 10 albums you need to listen to in 2019.

The year 2018 paved the way for K-Pop to reach mainstream worldwide media. This year, K-Pop will continue to grow in the global perspective and advance even further than before.

They are considered as one of the most popular boy bands of the early 2000’s in South Korea. This year, they will release a special album that contains some of their greatest hits as well as new compositions. Trending artists like IU, Henry, Urban Zakapa’s Jo Hyun Ah and Yang Da Il collaborated with the band for a remake of “Road”. The song was the title track of Chapter 4, their fourth album. Chapter 4 became their second million-selling album.

GFRIEND is a group that boasts technical performances and powerful vocals. This year, they will become the year’s source of light with their newest album, Time for Us. Their new theme displays an atmosphere of “ethereal, fairytale princess-like looks” as well as a “darker, bolder vibe” in their “Midnight” teaser photos, according to Billboard. The lead single, “Sunrise”, is composed by No Joo Hwan and Lee Won Jong. They are also responsible for GFRIEND’s 2018 hit, “Time for the Moon Night”.

This newest album from ASTRO is their first full length album. It contains 10 songs including an original composition from member Jinjin. “Bloom” is an emotional ballad and it serves as first of his many songs. The rising boy band explored many genres in this album. Among those are urban R&B, dance pop, teen pop, and EDM. In addition, their title track, “All Night” is by LDN Noise, the British producers that made No. 1 K-Pop hits for Shinee, EXO and Red Velvet. According to Billboard, this new LP “could take ASTRO to a new career high”.

4. Seventeen, You Made My Dawn

According to the magazine, Seventeen is ready to start 2019 with “a more mysterious aura”. Their winter release, You Made My Dawn, will drop on January 21st. Seventeen previewed “Getting Closer”, a dark hip hop track, in late December 2018. It shows that the boys will present another side of themselves as they explore different genres.

From her years in Girls’ Generation to her beginnings as a solo artist, Tiffany Young went through a process of “creative rebirth” to reach where she is now, according to Billboard. She is in the works of releasing a five-track EP early this year. According to the artist, her upcoming record will give fans a deeper glimpse into her past that made her who she is today. She shared that the album let her channel all of herself honestly into her art. Tiffany Young will release “Born Again” on January 24.

From a sold-out world tour to being the first K-Pop boy band to perform in the Jingle Ball US Concert Tour, MONSTA X had a very eventful 2018. They could barely hold back from revealing their 2019 plans when they talked with Billboard Magazine about their future projects. Kihyun shared that they have already made some stuff with other artists but it still remains top secret. I.M shared a collaboration with an unnamed male DJ while the group mentioned about having more English tracks coming.

2018 gave BTS two No. 1 albums on the Billboard 200 and the 8th rank in Billboard’s list of Top Artists of 2018. This iconic boy band just keeps on adding milestone after milestone on their belts. They haven’t revealed plans for their 2019 album yet but we’re sure that they will treat their passionate ARMYs with multiple releases in Korean and Japanese. Our fingers are also crossed for solo mixtapes and more collaborations after their English single with Steve Aoki. According to the magazine, this album will be “key in defining BTS’ legacy”.

Expectations are high for this girl group as they maneuver their first experiences in the international pop market. They have released world tour dates and have been included in this year’s line up for Coachella. It’s sure that 2019 will be a very eventful year for BLACKPINK. There is no word from YG Entertainment yet regarding their next moves but it has been confirmed that each member will release their own solo songs.

2019 is a big year for this boy band as they tease fans with hints of a full-group comeback. They spent more than a year as the NU’EST W sub-unit while Hwang Minhyun promoted with Wanna One. Nothing has been announced yet but they posted a video on their official Youtube account where viewers saw four flowers become five, indicating Minhyun’s return to his band.

G-Dragon, Taeyang, Daesung and T.O.P will return from their military services this year. YG Entertainment gave clues that their return could mean new releases, either from the members or from the band. In the meantime, Seungri is enjoying his days before enlistment which is scheduled early this year. He is currently on The Great Seungri Tour with shows all over Asia.

FacebookTwitter
SubscribeGoogleWhatsappPinterestDiggRedditStumbleuponVkWeiboPocketTumblrMailMeneameOdnoklassniki
Related ItemsastroBigbangBillboardblackpinkBTSG.O.D.GFRIENDmonsta xNU'ESTSeventeenTiffany Young
← Previous Story EXO Ranks Number One With Most Donations Made Under Its Name And Its Members Via K-Pop Star – Idol Ranking App
Next Story → Lee Sora Collaborates With BTS’ Suga And Epik High’s Tablo For New Single