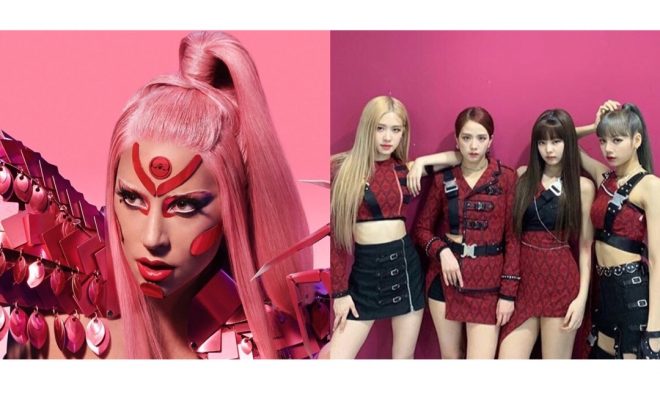 By Prerna Mistry | May 29, 2020
FacebookTwitter
SubscribeGoogleWhatsappPinterestDiggRedditStumbleuponVkWeiboPocketTumblrMailMeneameOdnoklassniki

BLACKPINK and Lady Gaga are definitely enjoying some sweet success with “Sour Candy”!

Just a day before the release of her fiery album Chromatica, Lady Gaga gave a taste of her new album to Little Monsters and BLINKS all over the world by dropping her collaboration track with BLACKPINK titled “Sour Candy.”

Within hours of its release, the track quickly rose to top of the charts in multiple countries.

“Sour Candy,” is now positioned at No. 1 on the iTunes Top Songs Chart in 57 regions all over the globe including United States, United Kingdom, Brazil, Mexico, Russia, Saudi Arabia, Philippines, Thailand, Spain, India and more.

Additionally, “Sour Candy” also topped China’s largest music site, QQ Music, coming in at No. 1. The track also proved its global popularity after trending worldwide at No. 1 on YouTube and Twitter.

BLACKPINK also expressed their excitement over the collaboration as they shared a snippet of the track on their SNS.

Jennie, Rose, Jisoo and Lisa took to their personal profiles to write sweet messages to Lady Gaga for the collaboration as well.

While Lisa promoted the song on her story, Jennie shared Lady Gaga’s picture and loving wrote, “Love and respect to this amazing woman.”

Rosé conveyed her joy as she shared a picture of the track cover and wrote, “Super excited to be a part of this Gaga. Love you so much!!”

Jisoo also shared the track cover and cutely asked, “Can we welcome you as our fifth member now? We love you Gaga.” 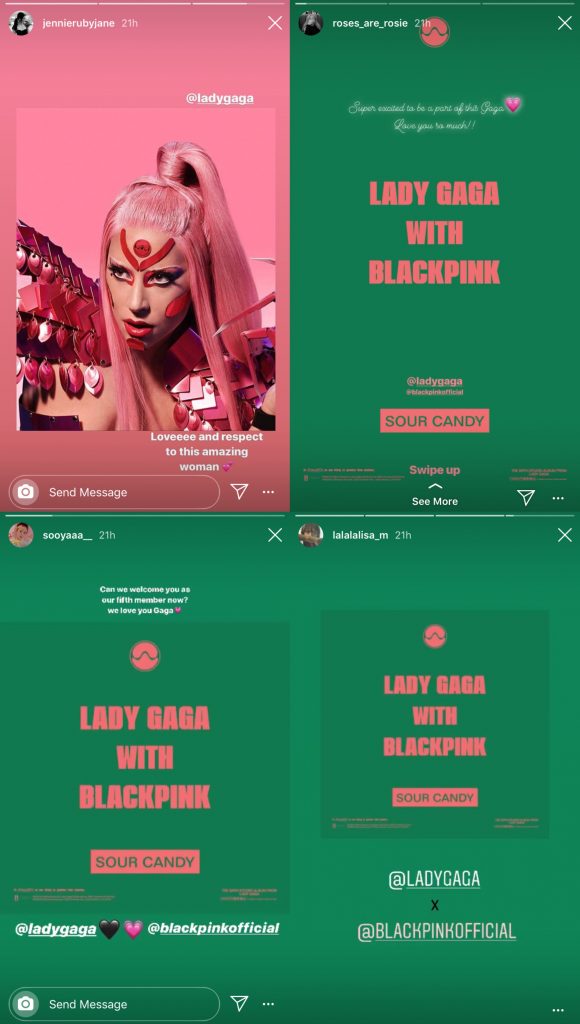 Meanwhile, BLACKPINK is gearing up for their comeback this year. The group will unveil a pre-release track in June. A second single will be revealed later in either July or August with the mini-album fully coming in September.

Hellokpop, as an independent Korean entertainment news website (without influence from any agency or corporation), we need your support! If you have enjoyed our work, consider to support us with a one-time or recurring donation from as low as US$5 to keep our site going! Donate securely below via Stripe, Paypal, Apple Pay or Google Wallet.
FacebookTwitter
SubscribeGoogleWhatsappPinterestDiggRedditStumbleuponVkWeiboPocketTumblrMailMeneameOdnoklassniki
Related ItemsblackpinkLady GaGaSour Candy
← Previous Story Singapore Indie Trio HubbaBubbas & K-Indie Singer Kwak Pureunhaneul Release MV For “Rumble Under My Toes”
Next Story → “With Woollim” Brings Participating Artists Together In Latest Teasers