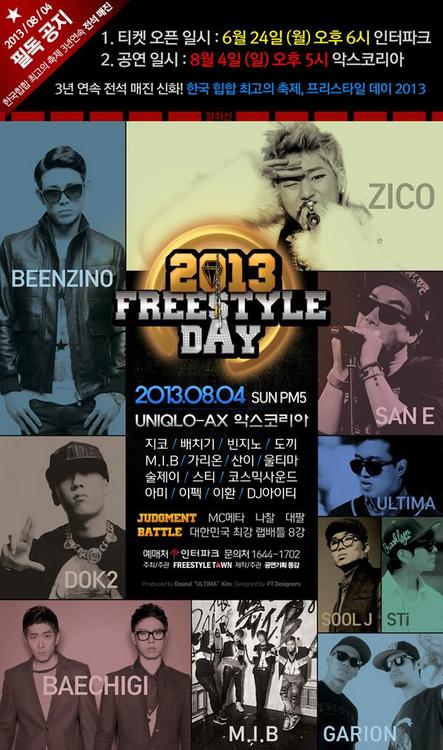 The ultimate gathering of the creme-de-la-creme of the Korean hip-hop industry, dubbed ‘The best Korean Hip-Hop Festival’, has once again emerged via Freestyle Day 2013,  with illustrious names in the K-hip hop sector such as Block B’s Zico, Baechigi, Dok 2, M.I.B , Beenzino, Ultima and many more participating in the event. Veterans like MC Meta and NaaChal of Garion serve as the judges for the annual event, which will be held on the 4th of August, Sunday 5pm at the Uniqlo-AX Hall.

Fans will able to have a chance to catch many creative yet heated freestyle rap battles between their favorite hip-hop artists and rappers through Freestyle Day, which is the brainchild of hip- hop artist Sool J. Sool J is credited as one of the pioneers of the freestyle rap culture ever since the mid 2000s.