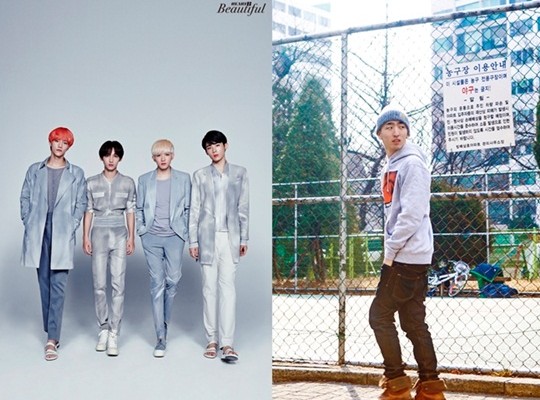 Rapper Andup, who appeared on Show Me The Money 4, will be featured in boy group HeartB‘s new album.

HeartB, who is made up of four members; Dojin, Jin Wook, Byul Ha and Chan Young, is set to make a comeback this September. According to the group’s agency on September 2, Andup will participate in rapping for HeartB’s coming track.

Andup was a participant in Show Me The Money 4, under Zico–Paloalto team, along with Song Mino, Jamezz and One. Andup, Jamezz and Mino have released a track together called Turtleship for the show.

HeartB has released its image teasers through a 13-second video on August 30.

We need your support! If you have enjoyed our work, consider to support us with a one-time or recurring donation from as low as US$5 to keep our site going! Donate securely below via Stripe, Paypal, Apple Pay or Google Wallet.
FacebookTwitter
SubscribeGoogleWhatsappPinterestDiggRedditStumbleuponVkWeiboPocketTumblrMailMeneameOdnoklassniki
Related ItemsAndupByul HaChan YoungDojinheartbJamezzJin WookONEPaloaltoShow Me The MoneySong MinoTurtleshipZico
← Previous Story 4Minute Selected As Official Ambassadors For ‘Maze Runner: The Scorch Trials’
Next Story → Rapper Jessi To Release A Digital Single