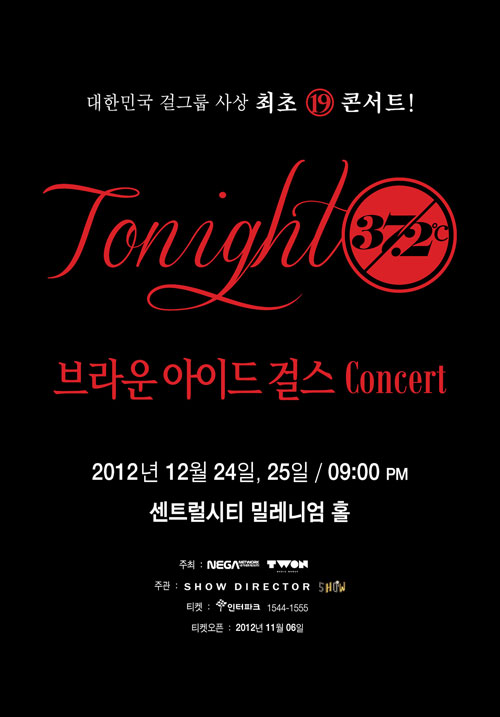 Brown Eyed Girls, the first girl group to open a ’19 and above’ adult concert has become a hot issue.

On November 22nd, Brown Eyed Girls asked the question, “What is the song you most want to hear?” regarding the concert Tonight 37.2°C. The fans all answered and wanted to hear the same ’19 and above’ adult song Moody Night.

Moody Night was part of the 3rd official album Sound G which was released in 2009. It was their only song so far that couldn’t be played or performed where there were minors. Because of that, they’ve prepared a concert only for adults, ‘no minors’ audience will be allowed. Moody Night was the song fans wanted to hear the most as it matched the theme of adult concert.

This concert Tonight 37.2°C will be their independent concert within 2 years. The members will be showing emotions and music regarding love and hidden desires and temptation with the four colors of the four members. They say it will be a special Christmas for the fans as the love story will be told through their music. The reservations for the tickets can be purchased through Interpark.

FacebookTwitter
SubscribeGoogleWhatsappPinterestDiggRedditStumbleuponVkWeiboPocketTumblrMailMeneameOdnoklassniki
Related Items19 and aboveadult concertBrown Eyed GirlsTonight 37.2°C
← Previous Story MBLAQ’s Lee Joon shows off his winter fashion with ‘Nylon’
Next Story → Kim Heesun regrets, “Does my daughter have to get bashed on because I am a celebrity?”