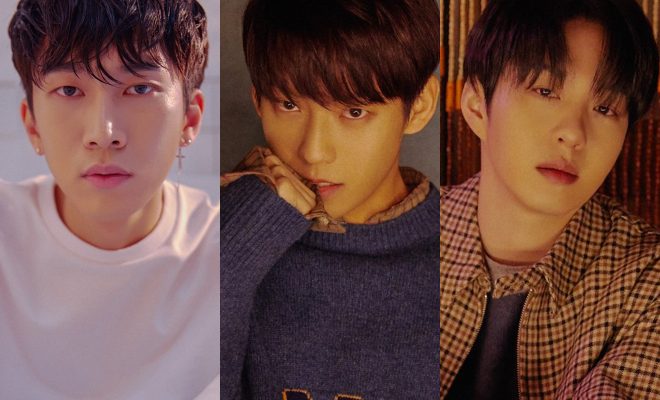 Missing Eun Kwang, Min Hyuk, and Chang Sub? Worry not because the BTOB members prepared something special for you all!

Enlisted members of BTOB made every Melody tear up as they announced the release of a new digital single next month.

The entertainment company, through BTOB’s social media channels, dropped a photo teaser on midnight of March 29, bearing the song’s title, the names of the enlisted members, and the release date.

Min Hyuk reportedly wrote the digital single described as a medium tempo ballad. It will serve as the three members’ special gift to Melodies who missed their voices after they went to fulfill their duty.

Leader Eun Kwang became the first member to enlist in the military, having started his service on August 21, 2018. He currently serves in the special forces for his exemplary performance.

Following Eun Kwang, Chang Sub came next on January 14, 2019. He joined boot camp a few days after completing his first solo concert titled SPACE. The three-day concert was held at the Yes24 Live Hall from January 4 to 6.

Min Hyuk became the third member to begin his military service. He enlisted on February 7, 2019. He then went on to serve as a conscripted policeman following the end of his basic training. Before enlisting, he made his solo debut with his self-composed album HUTAZONE.