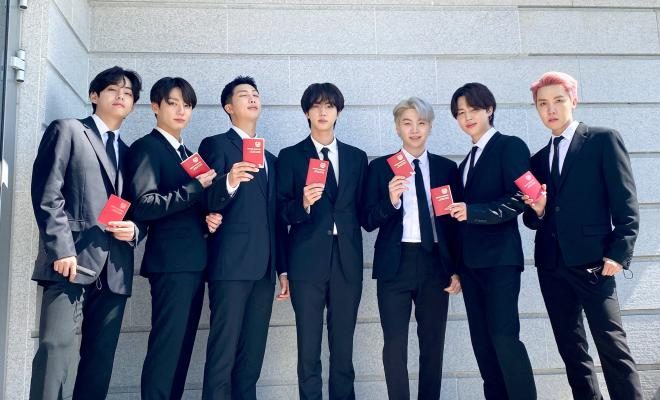 BTS continues to become a trusted representative of their homeland!

Worldwide phenomenal boy group BTS has been appointed as the special presidential envoy in South Korea. 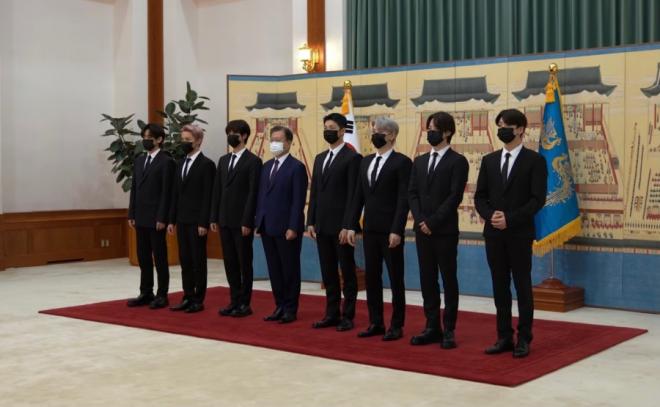 Earlier today, the septet visited the Blue House and reunited with South Korean President Moon Jae In for the first time in approximately one year since the National Youth Day in 2020.

Another first for BTS

The South Korean President has officially appointed BTS as the Special Presidential Envoy for Future Generations and Culture. Notably, the group became the very first pop culture artist to receive the appointment.

“We have appointed BTS as special envoys to lead the global agenda for future generations, such as sustainable growth, and to expand diplomatic power in line with our elevated status in the international community,” the Blue House announced.

RM, Jin, Suga, J-Hope, Jimin, V, and Jungkook wore elegant black suits. President Moon presented each member with a letter of appointment, diplomatic passport, and fountain pen. He also gave a fist bump to the boys. After the awarding, a group photo was taken. J-Hope then looked up at President Moon and raised two thumbs up, causing laughter at the scene.

As a special presidential envoy, the group will now be carrying their duties. First on their list is to accompany President Moon on a five-day trip to the United States from September 19 to 23. Moreover, HYBE revealed that the members as well as the agency’s officials were already vaccinated against COVID-19.

BTS’ first official event as a presidential envoy will be the 76th UN General Assembly, where the Sustainable Development Goals (SDG) event will take place on September 20. The group will grace the event to give a speech and a video performance. According to reports, President Moon asked BTS to deliver a message of comfort and hope to young people around the world.

In particular, attention is focused on what kind of message the group will deliver at this year’s UN General Assembly. They previously delivered heartwarming speeches during the launch ceremony of UNICEF’s Generation Unlimited at the 73rd UN General Assembly in 2018 and the Group of Friends of Solidarity for Global Health Security event in 2020.

Watch the highlights of the appointment ceremony below: