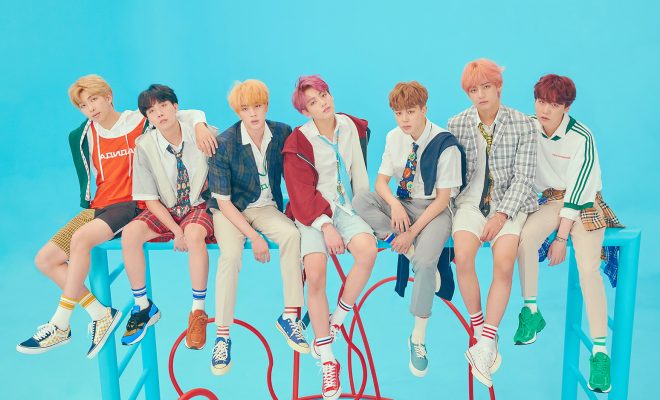 Did you see the bag of BTS? It’s full of trophies and historic wins!

South Korean boy group BTS writes another first for a K-Pop group. After their debut on the AMAs stage last year, RM, Jin, J-Hope, Suga, Jimin, V, and Jungkook level up this year as they join the list of winners at the annual music awards show for 2018.

And the winner of Favorite Social Artist presented by @Xfinity is… @BTS_twt! Congratulations! #AMAs pic.twitter.com/faRSJcMhVl

Unfortunately, the boys were not present to personally accept the award as the AMAs coincided with the London stop of their on-going Love Yourself world tour.

Still, they did not forget to send their warmest thanks to ARMYs for the support through a video message. “Thank you so much! We are thrilled to win the Favorite Social Artist award. We just finished touring America and there was so much love and support. Thank you ARMYs for voting for us for this very special award,” RM said in behalf of the group.

BTS adds the recognition to its already handful of stateside awards including a back-to-back Top Social Artist award at the Billboard Music Awards, a Best Boy Band award at the 5th iHeartRadio Music Awards, and Choice International Artist at the Teen Choice Awards for two consecutive years.

Moreover, the boy group has secured a number of Guinness World Record such as the most viewed YouTube music video in 24 hours with 45 million views for “IDOL”, the lead track of the final installment of the group’s Love Yourself series, Love Yourself: Answer.

Good luck with the show tonight @BTS_twt. We might even be able to hear from our London office just across the river from the @TheO2. Why not pop in for a cup of tea and pick up your certificates?! #BTSLondon pic.twitter.com/VFLRgDISGT

Meanwhile, BTS recently kicked off the European leg of its Love Yourself world tour at The o2 Arena in London on October 9. The boy group will hold another London concert on October 10 before moving to Amsterdam, Berlin, and Paris.

In November, RM, Jin, J-Hope, Suga, Jimin, V, and Jungkook will go back to Asia for the Japan leg of their world tour. They will then perform in Taoyuan, Singapore, Hong Kong, and Bangkok starting December 2018 until April 2019. More dates are expected to be announced.