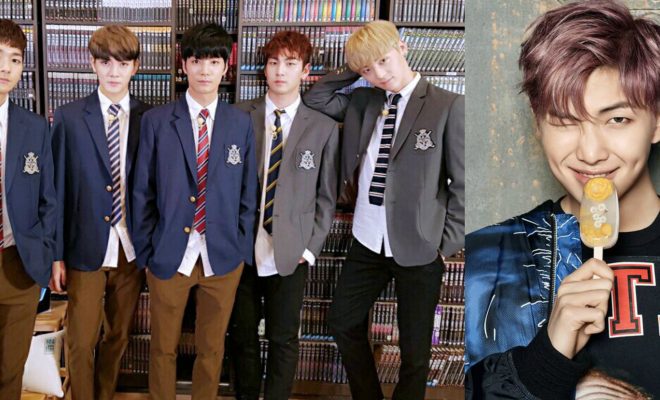 NU’EST and Rap Monster of BTS did that!

The most recent episode of newest season of the ‘New Yang Nam‘ show did not only bring into focus one of the most popular groups in K-pop, BTS, but has also shed spotlight to another group, NU’EST.

Asked what songs from other idol groups do they like, J-Hope chose BIG BANG‘s Fool. BTS’ leader Rap Monster, on the one hand, named NU’EST’s 2013 track, Hello, as one of his favorite songs. According to member Suga, the idol sings the song in the shower. Rap Monster then gave a sample of his version of the song.

Because of this, Melon’s Sudden Rise or Soaring Chart saw the surge of Hello into the top spot. The song became the most listened song at that particular moment. Keyword 여보세요 also became the top searched  word.

Aside from the sudden rise of the song in chart and search engine, the hashtag #뉴이스트 trended and peaked at the second spot in the Korea trends on Twitter.

NU’EST’s leader JR expressed his appreciation for the interest in the group’s song. He posted a screen capture of the trending searched keywords in his personal Instagram account. JR captioned the photo with, “Wow! Hello is the number one searched word! Thank you for loving our music.” He accompanied the caption with hashtags #랩몬 #랩몬스터 #뉴이스트 #여보세요 #봄날 and ended his caption with a “jjang” for BTS’ Spring Day.

Hello is the title track of NU’EST’s second mini album of the same title. The song was released on February 13, along with a music video starring actress Nam Bora.

Watch the music video of Hello below.

Hellokpop, as an independent Korean entertainment news website (without influence from any agency or corporation), we need your support! If you have enjoyed our work, consider to support us with a one-time or recurring donation from as low as US$5 to keep our site going! Donate securely below via Stripe, Paypal, Apple Pay or Google Wallet.
1.9k
SHARES
FacebookTwitter
SubscribeGoogleWhatsappPinterestDiggRedditStumbleuponVkWeiboPocketTumblrMailMeneameOdnoklassniki
Related ItemsBIG BANGBTSHelloj-hopeJRNew Yang Nam ShowNU'ESTrap monstersuga
← Previous Story MONSTA X to Return With A New Album This March
Next Story → BTS’ Jungkook Serenades With Charlie Puth’s “We Don’t Talk Anymore”