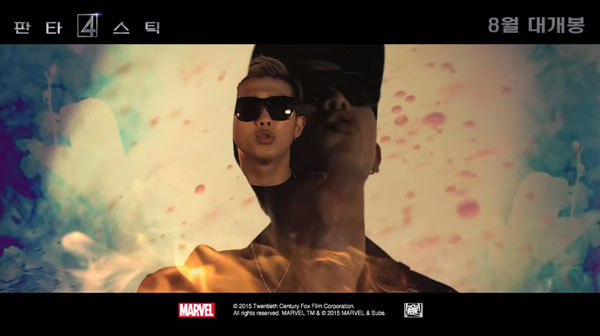 Nothing can be more fantastic than BTS‘ Rap Monster unleashing his digital track in collaboration with the Hollywood blockbuster Fantastic Four.

On August 4, the BTS leader dropped his music video for the collaborative track Fantastic. In the video, many scenes of the coming Hollywood hit were revealed. Rap Monster can also be seen rapping impressively.

Fantastic is a pump up song with fast rhythm and powerful lyrics’written by Rap Monster himself. Especially, with the collaboration of the artist Mandy Ventrice, who has previously worked with Jay Z and Kanye West, the song is likely to make a huge impact not only on the music scene, but on Fantastic Four’s success as well.

We need your support! If you have enjoyed our work, consider to support us with a one-time or recurring donation from as low as $5 to keep our site going! Donate securely below via Stripe, Paypal, Apple Pay or Google Wallet.
414
SHARES
FacebookTwitter
SubscribeGoogleWhatsappPinterestDiggRedditStumbleuponVkWeiboPocketTumblrMailMeneameOdnoklassniki
Related ItemsBLOCKBUSTERBTSFantasticFantastic FourHollywoodJay-ZKanye WestlistMandy Ventricequizrap monster
← Previous Story Wonder Girls Dominate Music Charts with “I Feel You”
Next Story → VIXX Continues ‘Can’t Say’ With Jacket Images