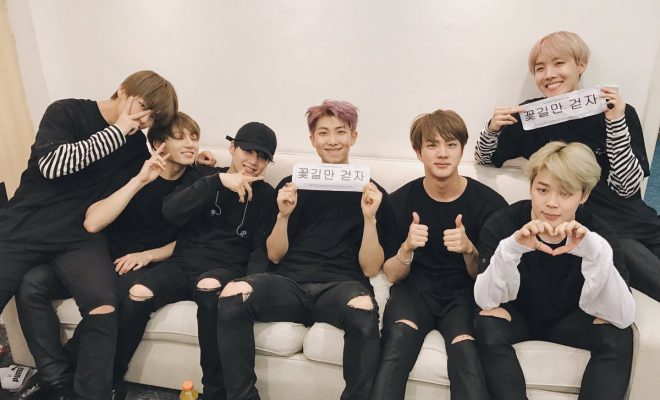 BTS is hitting it big!

Korean boy group BTS is spreading its wings wide open as they successfully wrapped up the South American leg of their world tour. According to Big Hit Entertainment, the septet sold about 44,000 tickets during their concerts in Chile and Brazil.

BTS became the fastest Korean boy group to sell out the Chile’s biggest indoor arena, according to Puntoticket, the ticket sales and distribution company. It also added that the ‘Wings Tour’ concert was the fastest selling show in Chile’s history, only comparable to American band Maroon 5‘s 2016 concert in the area.

The overwhelming response of fans prompted for an additional date to the Chilean leg of the tour, originally slated for an one-night concert on March 12.

The boys expressed their gratitude for the support and love they have been receiving. “You are our wings and thanks to you, we think we are flying well,” BTS said in a statement. They also added that they look forward to sharing more laughing and crying moments with fans.

They also tweeted photos, with captions relaying their thanks to the fans who went to see them.

After visiting Chile and Brazil, the septet will embark on the North American leg of their tour in Newark, Chicago, and Anaheim. Shows for the Newark and Anaheim were sold out as early as December 2016.

We need your support! If you have enjoyed our work, consider to support us with a one-time or recurring donation from as low as $5 to keep our site going! Donate securely below via Stripe, Paypal, Apple Pay or Google Wallet.
305
SHARES
FacebookTwitter
SubscribeGoogleWhatsappPinterestDiggRedditStumbleuponVkWeiboPocketTumblrMailMeneameOdnoklassniki
Related Items2017 Wings TourBTSj-hopeJiminjinjungkookrap monstersugaThe Wings Tour 2017 BTS Live Trilogy Episode IIIV
← Previous Story Park Bo Young And Park Hyung Sik Are Strong ‘Couple’ As They Top Brand Value Among TV Actors
Next Story → GFriend’s Yerin Shares Past Worries Of Her Being “Not Pretty Enough”