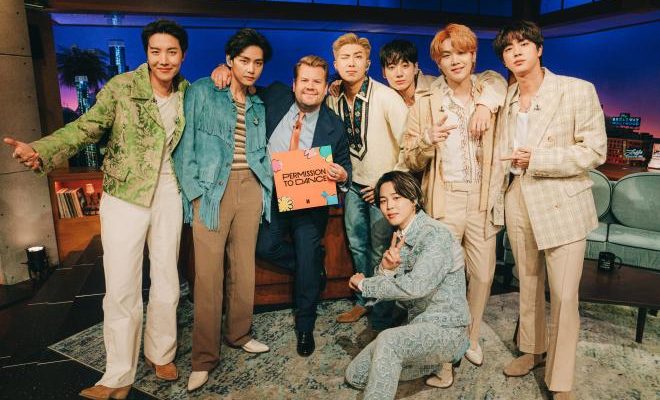 After nearly 2 years of mainly virtual events only, BTS is back in the US to appear on talk shows, attend award presentations, and hold a series of concerts. And today, they stopped traffic with James Corden’s Crosswalk Concert.

Fresh off their tremendous triple win at the 2021 American Music Awards, BTS is busy hustling from the crosswalk to the sidewalk with James Corden.

Snippets of the septet filming for Crosswalk Concert revealed that they made at least 3 outfit changes to perform “Dynamite”, “Butter”, and “Permission to Dance” in the middle of the road while cars waited for the traffic lights to turn green. It’s no secret that being stuck in traffic is terrible, but if BTS is entertaining us until the lights switch color, would we still complain? That’s a hard no.

Clad in their iconic new era BTS ensembles, Jungkook, Suga, Jin, RM, Jimin, V, and J-Hope showcased their dance skills and vocal chops and then ran for their lives once traffic lights gave them the go signal.

Of course, their ninja performance was not free of the occasional trip, fall, piggyback ride, scramble, and squeal; and that’s why it’s a segment to look forward to!
Also, big props to the Late Late Show team for pushing, pulling, rolling, and rearranging the elaborate props accordingly without getting hit by a car. It’s a true talent, really.

If you’re part of the ARMY, then you must be all too familiar with the legendary canceling of James Corden that happened shortly after the United Nations General Assembly (UNGA) a few months ago. Most likely meaning well, but making an unpleasant choice of words, the talk show host stated that there were “unusual guests” at the UNGA.

He probably wouldn’t have predicted it, but that one statement prompted ARMY to symbolically dunk him in scorching hot water in a fiery cauldron. The fandom even tried to revoke Corden’s “Papa Mochi” status and award it to Jimmy Fallon instead. (Why can’t we just have 2 Papa Mochis, though?)

Luckily, BTS and James Corden cleared the air during their studio interview, showing fans that all is well in the land of Mochi.
Baby Mochi (Jimin) and the entire band have forgiven James Corden for the little misunderstanding, so you can now safely uncancel him, ARMY. 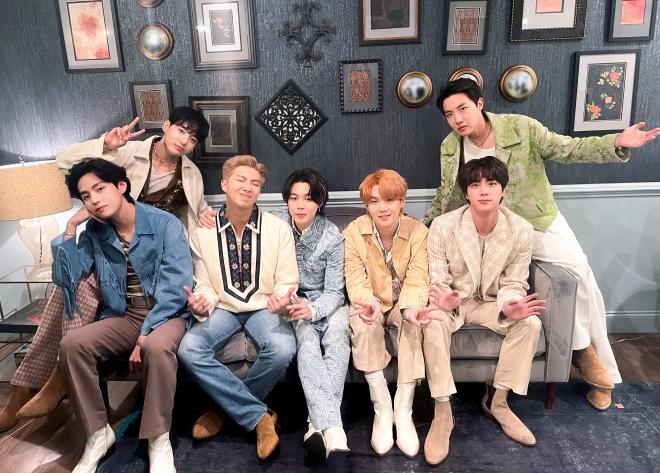 Meanwhile, BTS raked in 1 nomination (Best PopDuo/Group Performance) for the 2022 Grammy Awards and is gearing up to hold their very first semi-post-pandemic-in-person concert tour; and here’s where you can catch them:

Where will their next concert venue be? South Korea, maybe?