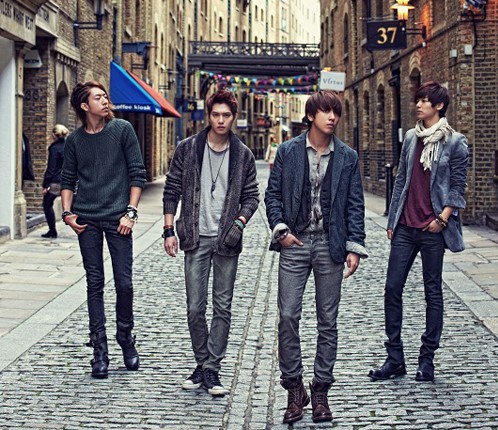 Bugs Music interview with CNBLUE: Which member cares for his looks the most?

As CNBLUE mainly focuses its activity to an overground crowd, they have gained more than sufficient fans to be called the band’s idols. But some may think them as not so lucky to have the opportunity to showcase their talents. However, with each album release, CNBLUE boys prove more of their actual skills and matured especially with the newest album of songs that the members worked on personally.

A. Re:BLUE is our 4th mini album comeback within 10 months in Korea, the album is filled with 6 songs which are all of CNBLUE’s creation. With the title song I’m Sorry following with Coffee Shop, A Guy Like Me, Lalala and Where You Are were, all written by member Jung Yong Hwa and More Than You was written by Lee Jong Hyun. The title song I’m Sorry is especially trendy and is a powerful modern rock genre song which we could really fully express our color with. Outside of the modern rock genre, we have created a pop and disco rock, plus other various genres in the album. We hope you like them.

Q. What kind of song is the title song I’m Sorry?

A. Jung Yong Hwa’s song I’m Sorry has a lot of  pop elements with an addictive melody. The song expresses a guy’s heart after being hurt from the lover’s last word “I’m Sorry”. Using the electronic synthesizer and guitar sounds, the song became a powerful and trendy modern rock song.

Q. The fact that the title song was Jung Yong Hwa’s first written song left a different impression! How does it feel?

A. Each album contains songs that I worked on, but this is the first time that my song is the title song, so I was a little burdened at first. I tried really hard to put in a lot of pop elements in the song. I was worried and unsure if the fans would like it because it was different from what I’ve tried before. I hope you enjoy it!

Q. Other than the title song, which song from the album do you feel really attached to and what is the reason for that?

A. All the songs are really great, but the members decided that Coffee Shop was the best, it is a song that we want to let many people hear live.

Q. The music video for the title I’m Sorry was filmed in London, please tell us any funny episodes during the filming.

A. Rain! It rained so much and it was so cold. We do hear that it rains often in England and that it is chilly in general but during the filming, it rained for the whole duration. The staff in England even said that they believed that it had probably rained all the rain that could fall for the whole year. Due to the rain, we had to postpone and delay part of the filming.

Q. CNBLUE is famous for being acting-idols (acting-dols), are there any plans to meet your fans through any drama pieces this year?

A. Currently, Jung Shin is acting in My Daughter, Seo Young and since we have made our comeback, for the meantime, we want to focus on the comeback activities. Since it’s been a while since we stood on stage, we would also like to greet our fans for as long as possible.

Q. Which member of CNBLUE cares for his looks the most?

A. Actually, none of the members really cares for his looks too much. We look at the mirror often only right before a television program or broadcast but if we had to pick one, it would either be Min Hyuk or Jung Shin! (laughs)

Q. Last December you held a successful concert, is there any new plan of meeting your fans through concert this year? If you do, when are you planning to have it?

A. To keep it short, “We will meet you soon!” Please look forward to it!