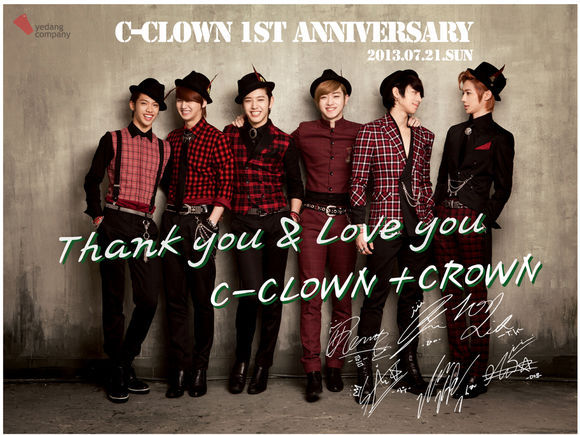 In conjuction of C-Clown‘s first debut anniversary on July 19, the group will hold a fan meeting at Hongdae on July 21.

On July 18, Yedang Entertainment said: ‘In order to spend time with the fans, they are also practicing hard in sweat in the busy schedule. In addition, they have also prepared a special event for the first year anniversary, so please anticipate it.‘

C-Clown, who are signed under Yedang with artists like ALi, Im Jaebum and Guckkasten, debuted on July 19 last year with Solo, and have made two comebacks with Far Away and Shaking Heart.

C-Clown is confirmed to perform at K-Fest Summer in 2013 at Yokohama and K-Pop World Music Festival 2013 in Thailand on 11 and 17 August respectively.