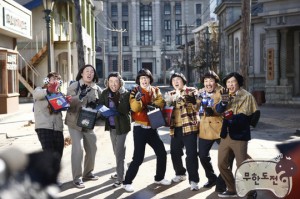 The cast of MBC‘s variety program ‘Infinite Challenge’ will be holding a concert this year to thank fans for their unwavering and overwhelming support.

On the 12th of July, LeeSsang Company announced that the cast of ‘Infinite Challenge’ will be holding the concert ‘SUPER7’ on the 24th and 25th of November at the Seoul Olympics’ Gymnastics Stadium. The seven members-Yoo Jae Suk, Park Myung Soo, Jung Jun Ha, Jung Hyung Don, Gil, HaHa and No Hong Chul will grace the concert with their presence. Presently, the labour strike at MBC has gone into its fifth month and news of the ‘Infinite Challenge’ concert is expected to help ease the pent-up frustrations of fans.

A representative of the official sponsor, LeeSsang Company, stated that “the cast of ‘Infinite Challenge’ meet each other almost every day and for a long period of time, they have been worrying and waiting. During this period of time, fans have given much love to ‘Infinite Challenge’ and have tried to save [the show]. Desiring to repay their [loyal] fans, the members have been unable to sit still”.

Also the representative revealed that “various meetings to plan for the items have been conducted, all painstakingly done in order to plan this large-scale concert”. He also added “the seven members have a special love for and attachment to ‘Infinity Challenge’ more than anybody else”.

According to MBC, plans to check whether the labour strike would come to a close will be held on the 14th of July. Predictions of Infinite Challenge’s long hiatus finally drawing to a close in the near future have been emerging in recent times, albeit carefully.